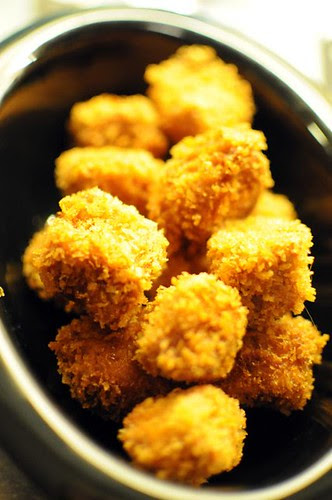 We had our annual dinner last night - where we, and our friends Lena and Dagmar and their husbands, get together to cook a 13-course meal. As usual, it was absolutely fab! To give us a bit of a challenge, we decided to have an around-the-world theme. We agreed on 13 countries (or in some case, regions) and randomly assigned them. Every couple then fixed four courses each - an appetizer, a main course and a dessert, and one more. I made five dishes, to make it an (un)even 13. 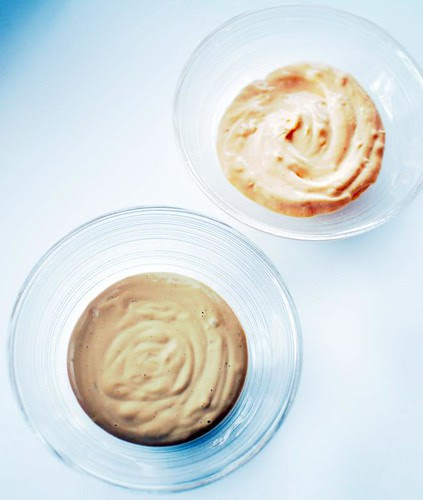 First out: Japan. I served tonkatsu (breaded and fried pork) and edamame beans with chili-garlic mayo and a wasabi-soy dip, and a sparkling sake that was surprisingly tasty. (Chikurin Hou Hou Shu) 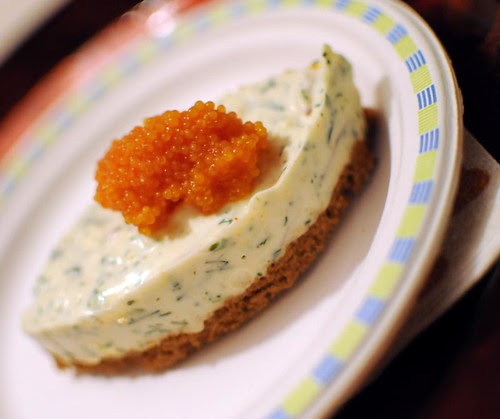 Sweden. Lena made a sort of cheesecake from Swedish Västerbotten Cheese, on rye bread. It was quite spicy and very delicious. 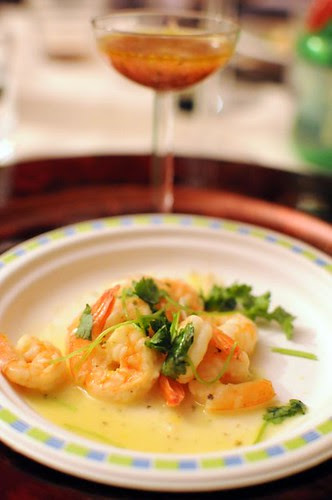 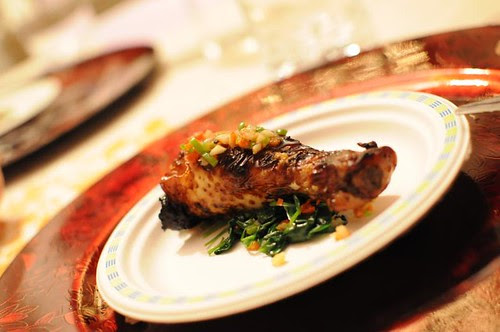 China. My turn! I adapted a recipe from Steamy Kitchen to make Five Spice Chicken legs, served on some sauteed spinach. 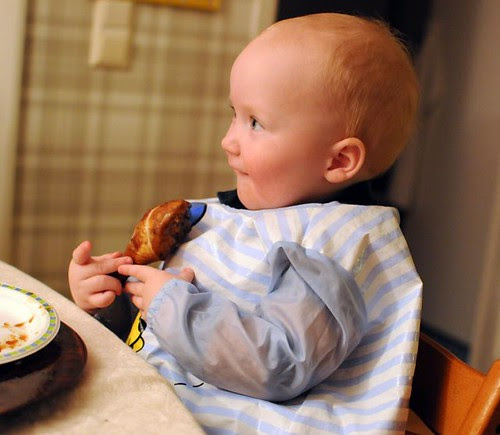 Titus got his own chicken leg - he liked holding it, but he didn't actually eat any. 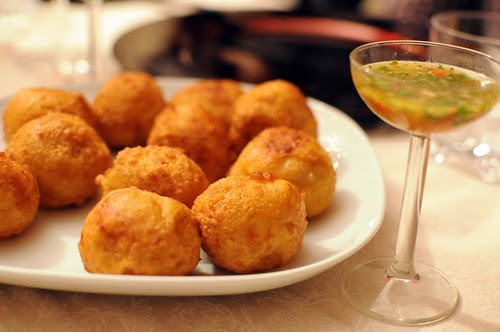 Colombia. Quite a challenge as none of us knew the first thing about Colombian food! Lena made Papas Rellenas Colombianas, which was essentially meat-filled potato dumplings, deep fried. 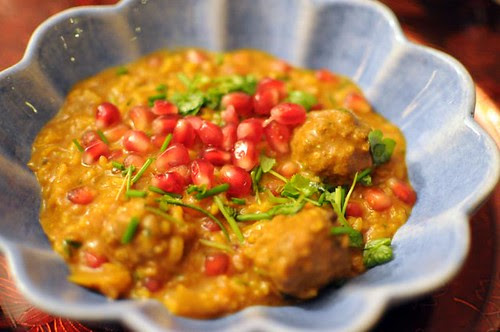 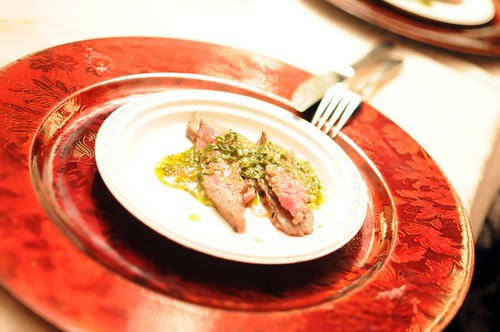 Argentina - I had no trouble on this one, but knew right away I wanted to make flank steak with chimichurri. It was the first time I cooked with flank steak, but most definitely not the last! 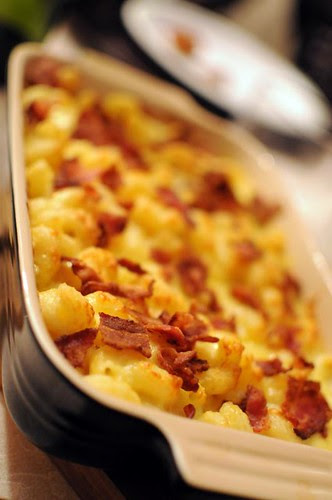 USA. If anyone was still hungry at this point, Lena's Macaroni & Cheese with bacon and chicken wings took care of that. 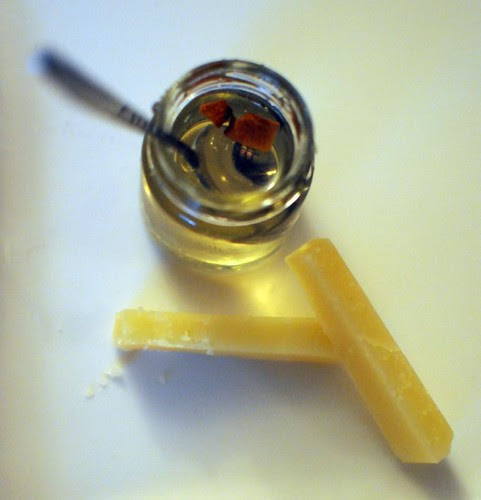 Italy. I wanted a cheese dish, and opted for the simplicity of an aged Pecorino cheese with truffle honey. 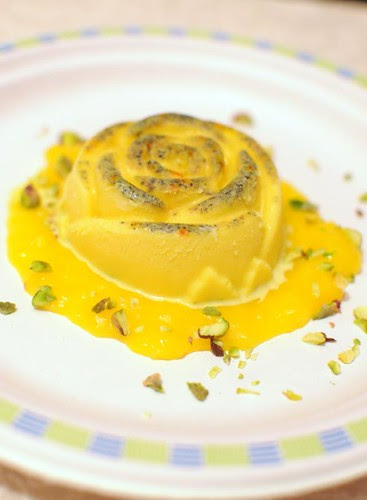 For our first proper dessert, Dagmar had made Indian ice cream, Kulfi, with a mango sauce. Isn't it just gorgeous? 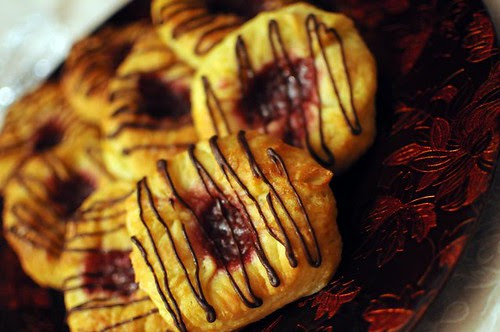 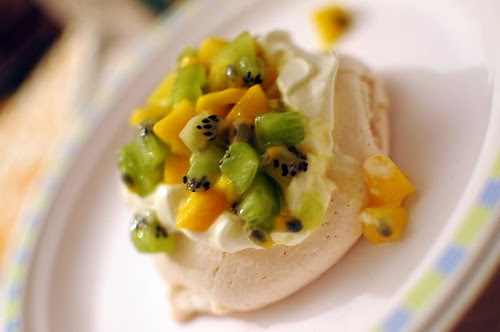 I had Australia/New Zealand and again, easy. I had to make pavlova. It's both easy and delicious - meringue nests filled with whipped cream and fruit, in our case mango, kiwi and passion fruit. 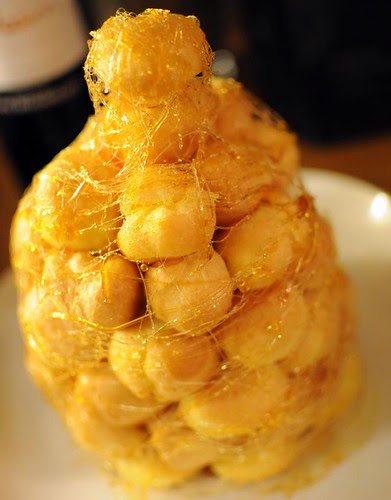 And for our big finale, Dagmar made a classic French Croquembouche, filled with cream and a homemade lemon-lime curd.

A nice culinary journey around the world.

I 'borrowed' one of your photos and included in my blog, together with the source. Its the photo of the cheesecake, really nice. I hope its OK to do this
http://three-cookies.blogspot.com/2011/01/saturday-january-8-2010.html

Love this idea!
Loved the photos-yum!
And Titus, as usual, is adorable!
Blessings,
Aimee

Ah, I always look forward to these posts!

Great looking dishes... although I am slightly confused about the USA dish. There's chicken IN the mac 'n cheese? I've never heard that before... was it tasty?

samantha - no, it was on the side :) I just didn't get a good picture of them.

What a great idea. Any chance that you'll share the Swedish Västerbotten Cheese cheesecake in one of your blogs. It looks really tasty.

It was really tasty - but I didn't make it so I don't have the recipe. Hopefully Lena might want to write about it, though!

I am from Argentina and I have to say your choice was very good as steaks with chimichurri is something both very representative and a staple dish we have all the time. I am somewhat curious about the chimichurri recipe as they are loads floating around, and it is one of those things that people make as they go without a proper recipe so to speak. Did you enjoy it? I certainly hope so!

Gaviota - Oh, I didn't know you were from Argentina! We all really loved the chimichurri - it was great! I used a recipe I found online, among MANY - it had sherry vinegar, olive oil, garlic, onion, flat-leaf parsley, fresh oregano, fresh basil and I added a little coriander as well. I have quite a lot left over though - any ideas how I can use it up? I'll post about it soon, too!

Hej Anne!
Yes, I am from Argentina but I have been living in London for a while now...
Back home we quite like a sandwich of chorizo (quite unlike the Spanish one I have to say) in a mini baguette bun with loads of chimichurri on top while we wait for the asado (barbie) to be ready (it takes ages!) I have been known for having it on top of crostini or bruschetta (nothing else!) but I am thinking it would go extremely well with pork chops or any of the sausage family. I noticed your version was quite mild (some recipes include VERY hot red chilli peppers!) so maybe it wouldn't go bad with some types of fish either. Have you thought of marinating some steaks, chops or other meat in it and then grilling it the next day? I'm sure it would flavour the meat wonderfully.

I hope it helps!