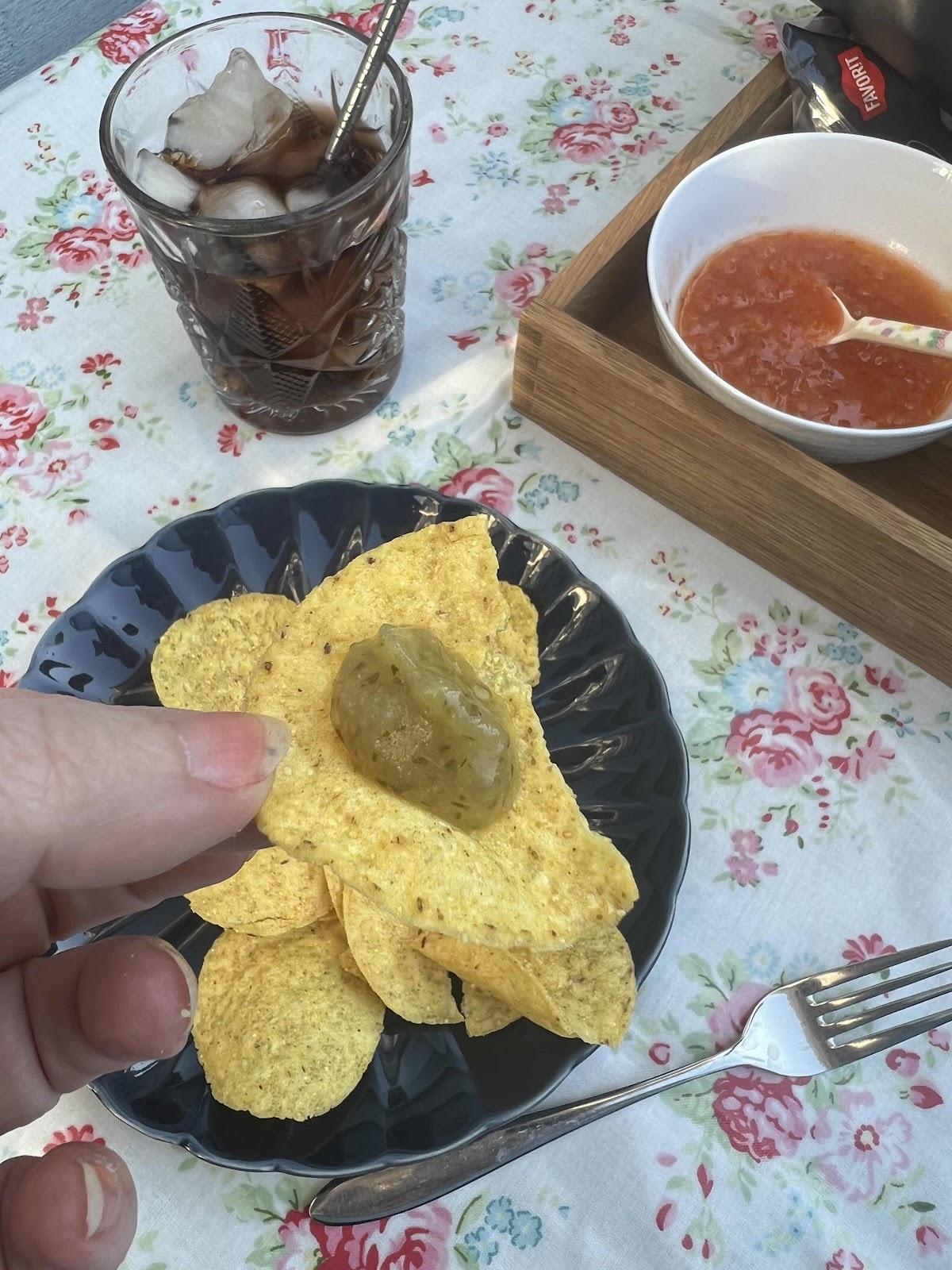 Titus first had tomatillo salsa at Dos Caminos restaurant in NYC, on our trip in early 2020. (As a side note, it was in the airport on the way back that we first really heard about Covid and what it might mean…)
He loves it. Green, spicy, sharp and fresh. We then forgot all about it for a while, but recently he’s been asking about it and I hunted for tomatillos for a while. Clearly not grown in Sweden and pretty darn expensive, but eventually I found some. I googled various recipes but ended up doing something like this:
Tomatillo salsa
5 tomatillos
2 shallots (white onion would have been nice, the store was all out)
1 large garlic clove
1 small jalapeño, seeded
1 lime, juiced
Cilantro, to taste
Salt
Cut tomatillos, shallots, garlic and jalapeño in chunks. Cover with water and simmer for 7-8 minutes. Drain but reserve cooking liquid.
Put in a blender with cilantro and lime juice. Blend until smooth. Now, put it back into the saucepan and simmer for about 15 minutes. It will thicken so use some of the reserved liquid to get it to the consistency you’d like.
Taste for seasoning.
Posted by Anne at 19:53 No comments: 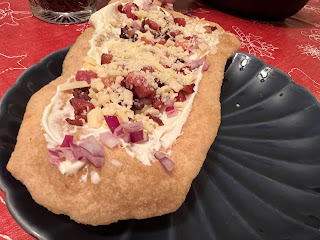 Have we ever talked about Langos? Originally an Hungarian dish, but made very much every-man's-festival-favorite during the 90's in Sweden. I never tried them back then, mostly because the traditional way of serving them was with roe - not my fave. However, my pal Dagmar made them for me, and her topping was far superior: creamy fatty smetana (to make all the other things stick), crispy fried bacon, sharp chopped red onion and strong umami-rich Västerbotten Cheese. Oh, and you begin by rubbing the newly fried bread with a slice of garlic.

We often requested it when she made us dinner. It was lovely. And then she moved away. And for a while, langos became a yearly tradition when we finally saw each other. But during covid-times, it's just been so long. I had to try making it myself.

My first go - which was last New Year's Eve - was not that great. I had mostly great big fried bubbles. Good, but pretty inconvenient to eat. This time, the dough was less puffy and much better, so I thought I'd write down the recipe.

This makes enough for.. well, four adults and some kids. We're just two adults and two kids and we have way too much. Don't fry more than you'll eat, they're better just after they're made. Add whatever toppings you like.

And well, if you happen to have room... they're pretty delicious served with Nutella, whipped cream and fresh berries as well. 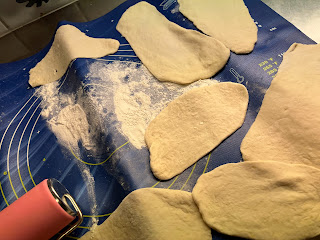 Crumble the yeast into a bowl. Add the water and swirl until the yeast is dissolved. Add salt, potato, and the flour. Work into a smooth and supple dough - I used a Kitchen-Aid and let it run on the lowest setting for a little less than ten minutes. Leave to rise for about an hour (I watched Gremlins in the mean time so.. a little more than an hour.)


On a well floured surface, divide the dough into equal-ish portions, and with a small roller, shape into thin ovals, about the size of your hand. (or a little longer).

Heat the oil, and when it's warm enough - about 180, 190°C. Add one or two langos at a time and fry for about a minute on each side. Place on paper towels to drain some of the excess oil, then eat at once. 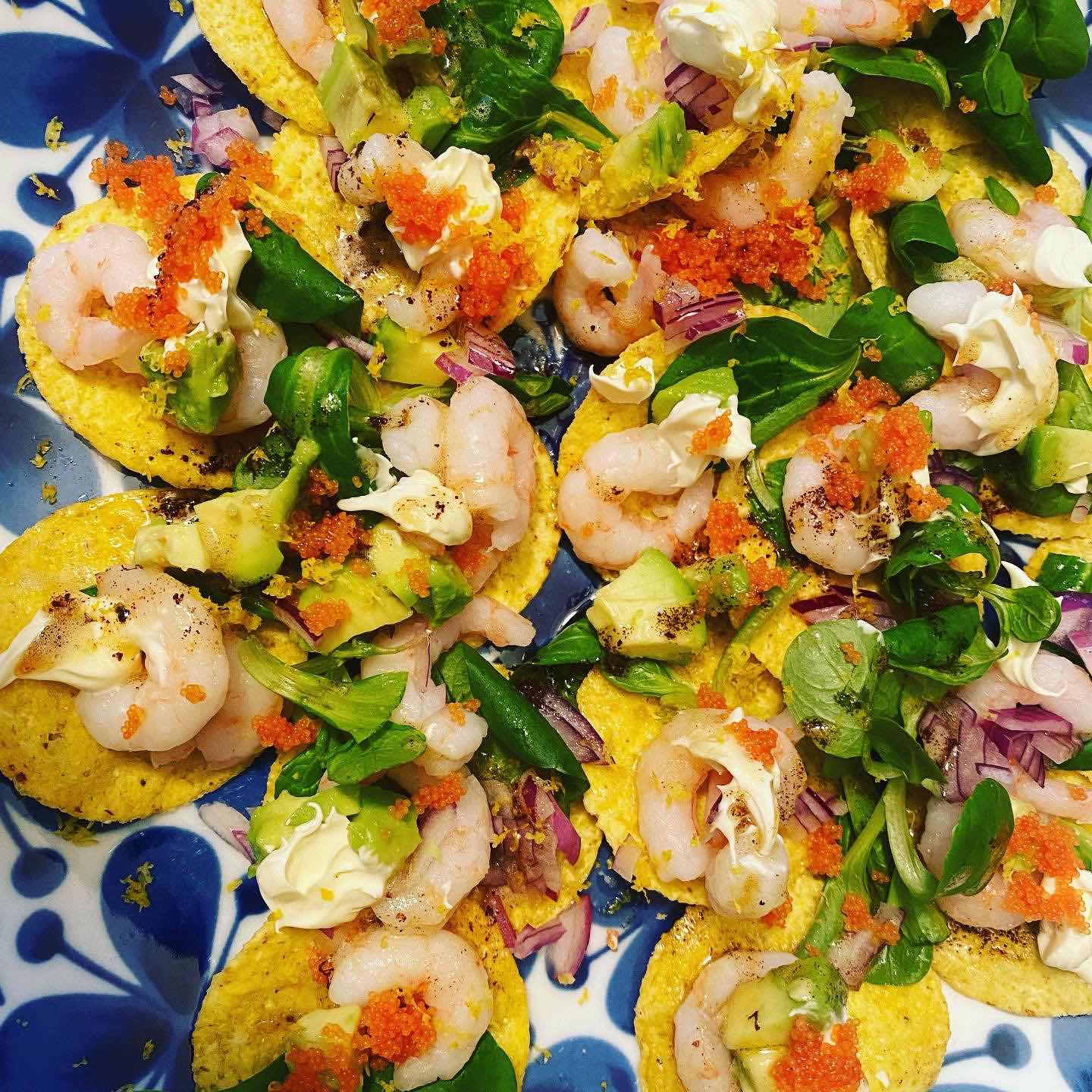 Every Friday is Taco-Friday in Sweden. I know, weird,  right? (Read more about that crazy phenomenon in this interview I gave many years ago, here!)
Well, we don’t eat tacos, or versions thereof, EVERY week but it’s a regular occurrence for sure. And I’m always interested to hear about new fun ideas. My husband found a photo of pretty unorthodox shrimp tacos on Instagram, and I decided to make a version at home.
This is the kind of recipe that’s not really a recipe, just an assembling instruction. Here is what we used:
-nachos
-cooked shrimp
-finely chopped red onion
-smetana (or creme fraiche)
-lemon zest
-avocado
-salad (we used mache salad)
-red fish roe
-browned butter (do NOT skip this, it totally made the dish!)
I like to just put everything out in bowls and let everyone make their own plate. Fun and delicious!
Posted by Anne at 11:03 No comments: 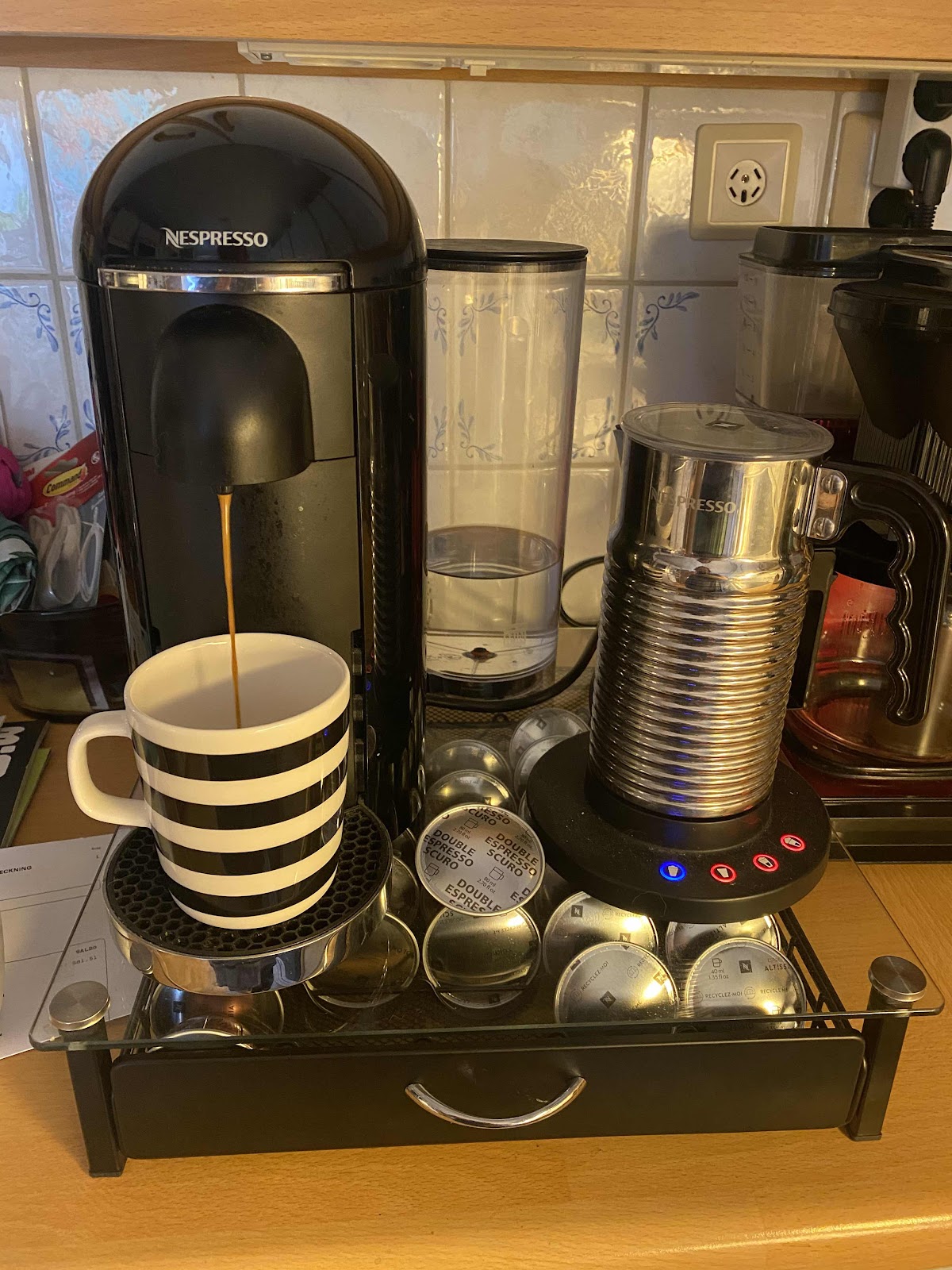 I just got the urge to show you our Nespresso setup. (And no, this is in no way a sponsored post - I just happen to really love it.)
This is a really important part of our kitchen and daily routine. I start most mornings with a cup of coffee, and if I’m alone I always opt for the Nespresso Vertuo. We have a Moccamaster too but that’s really only worth it if I’m making coffee for more people. My husband usually has breakfast at work, so unless he’s working from home, it’s just me.
And speaking of working from home, Nespresso is perfect for the after-lunch coffee as well. My favorite for that is a flat white - a double espresso with foamed milk. In the mornings, I usually make a bigger mug. This is what I love about the Vertuo vs. the classic machine - bigger capsules make bigger cups of coffee.
Our foamer is an Aeroccino 4. It’s really nice way to use, and while I like it I’m contemplating getting the very cool Barista foamer instead. Has anyone tried it? It’s programmable for a variety of drinks and I can really see that it would be handy!
Our capsules box is from Amazon and it truly makes me happy. It holds up to 50 capsules and takes virtually no extra space on the (already overcrowded) counter. Definitely a good buy! As for what capsules to get… it’s really up to you. With the classic line we always got the strongest ones, but I find that’s not at all the same with the Vertuo. I usually opt for the ones that say 6-8, and I always have milk with my coffee.
Posted by Anne at 14:33 No comments: 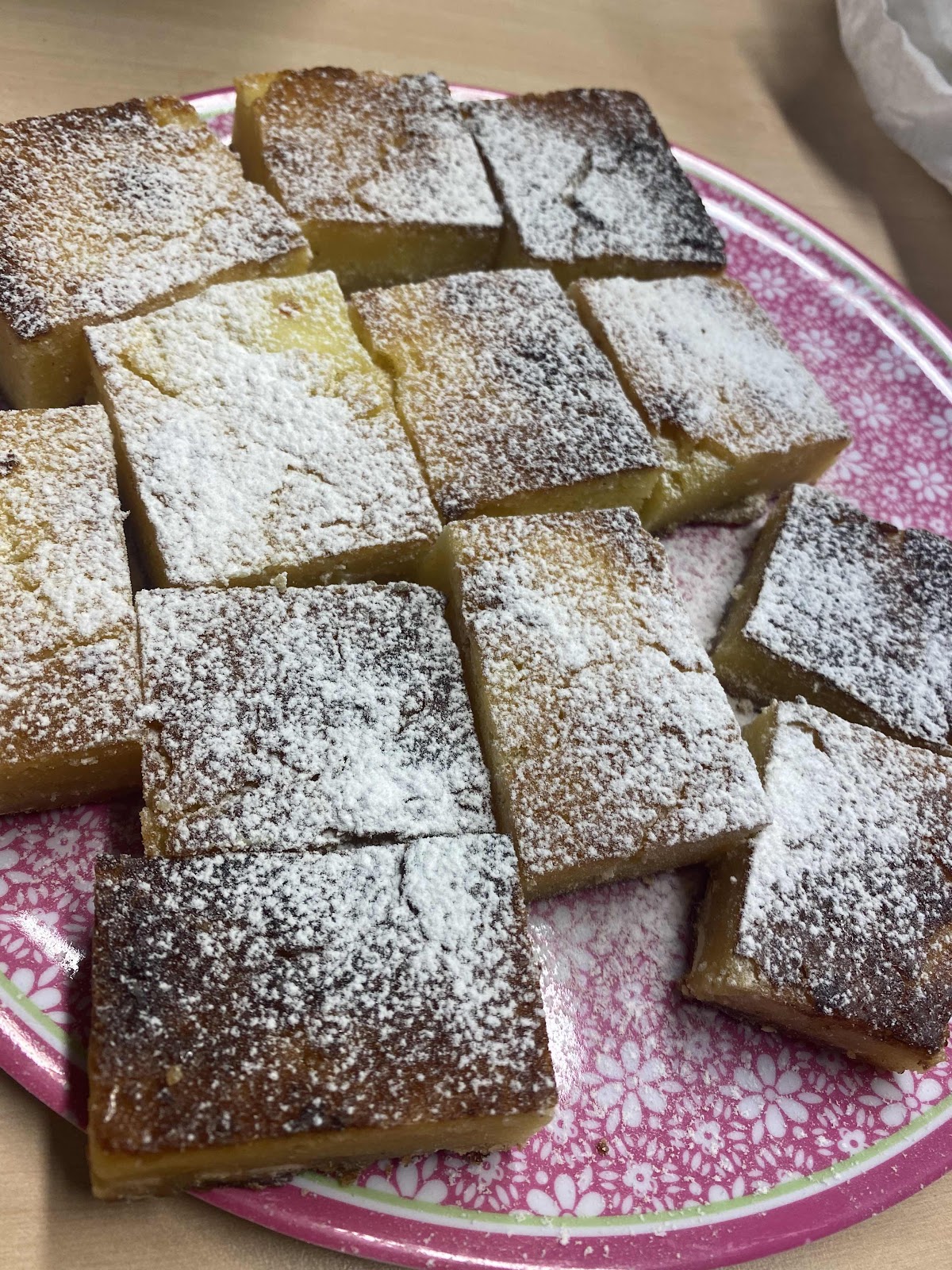 Lemon Brownies
Makes 12
150 g butter
2 eggs + an extra egg yolk
2 lemons, zest and about 50 ml of juice
200 ml sugar
150 ml gluten-free flour mix (I used Semper Finmix)
2 tsp vanilla sugar
Pinch of salt
100 g white chocolate, coarsely chopped
powdered sugar
Prepare a 20*20 cm square tin by lining it with baking paper. Heat the oven to 175C
Melt the butter.
Whisk the eggs, they don’t need to be airy, just well-blended.
Add the lemon zest and juice to the butter, along with sugar, vanilla sugar, salt and the gluten-free mix. Add the eggs and stir well. Finally add the chocolate.
Pour the batter into the prepared tin and bake for about 15 minutes. It should be firm around the edges but can be a little bit wobbly in the middle.
Let it cool completely before cutting, ideally overnight. Sprinkle with some powdered sugar before serving.
Posted by Anne at 09:41 No comments: