So I tried to make nutless macarons... 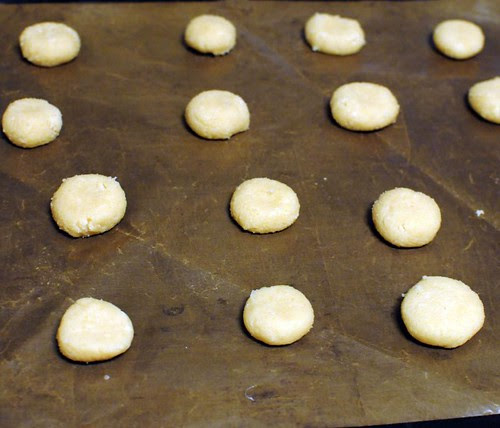 Again, I tried making french macarons using coconut, rather than almond meal. And again, I totally failed. My first attempt was quite tasty, but ugly - I had used regular coocnut, which I'd toasted and ground. This time, I used coconut flour that I lugged home from New York and I somehow expected that to work perfectly. It sure didn't.

First, it absorbed a LOT more liquid. I used five egg whites rather than three, and it was still nowhere near pipe-able. I ended up rolling small balls which I flattened, to make approximate macaron shapes, as you can see in the photo. In fact, I'm not completely sure if the photo is taken before or after baking, and that should tell you quite a lot. Nothing, nothing at all, happened during baking.

In the end, they were ok. Somewhat tasty. But completely dense. Definitely nothing at all like macarons, that's for sure.
Posted by Anne at 11:01

I've been following your blog in a while and this is by far, the most funny outcome of an experiment of yours! Nice try anyway - I liked the idea of baking macarons without the nuts. Maybe I'll try looking for alternatives for nuts instead. Your post got me in the hype to try experimenting! I'll buy truffles online later and try something with them as soon as i get home!

I just tried this myself, and now I'm surfing the internet trying to understand why it didn't work. I got precisely what it looks like you got--a stiff dough similar to sugar cookies.