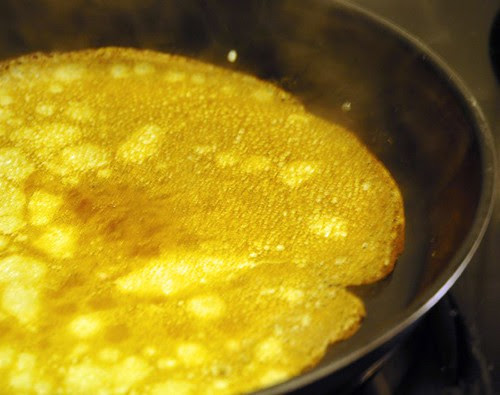 I suppose I should have blogged about Swedish Pancakes long ago. After all, it's a staple in most Swedish households, and beloved by kids and adults alike. However, it's not a staple in MY household, and actually, I just learned how to make them. My mom made excellent pancakes, so I never had to. And Per made good ones too. Until he forgot how. (A real disaster, that one.) See, we eat pancakes maybe once a year. And this time, he just forgot how he usually makes them. So, a very grumpy Anne decided that it was probably time to just learn it.

And it's not hard at all. But it is hard finding a recipe that works for you - everyone has their own preference, and a lot of people just add flour and milk until "just right" - whatever that is. Swedish pancakes are thin, and made without baking powder. They shouldn't be fluffy at all. We usually eat them with jam, some people add whipped cream which makes it more of a dessert (traditional on Thursdays, after a split pea soup by the way) and some eat them with just sugar. I like a dollop of crème fraîche on mine. I don't know of anyone who eats it with something savory - but you could, of course. Anyway, this is the recipe I ended up using.

Beat eggs and flour until smooth, and gradually add the milk. Add salt and vanilla sugar. Make sure you have no lumps! Stir in the melted butter. Leave the batter for at least an hour, to rest. Then fry thin pancakes in butter - buttering between every third pancake should be enough - on medium high heat. Don't put too much batter in the pan - they should be thin. Fry until the bottom is golden, then flip using a large spatula. It's really not very difficult, so don't be afraid. 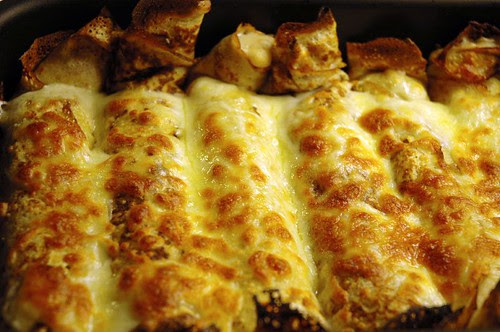 Any leftovers? Make crêpes! Just fill the pancakes with something tasty - I like a thick mushroom stew - roll them up, top with cheese, blitz under the grill until cheese is melted. Simple as that.

Recipe in Swedish:
Pannkakor
Posted by Anne at 13:23

But Anne, poor thing, you have to get a real cast iron "pannkakslagg" for your "pannkakor"! But if you have them only once a year maybe the pan is a luxury.

Hint: You can toast tortillas on a pannkakslagg too to make wraps.

I make Swedish pancakes regularly, often for supper after a light soup, for the grandkids and with half of the flour whole wheat. They love rolling them up with jam and whipping cream inside.

P.S.I'm following the progress of Jamy, Julius, Jupiter and Juliet with great devotion!

Isn't it funny - pancakes are usually some of the first things kids learn to make as they're so easy - but somehow I skipped that stage! In fact, I can honestly say I've never made pancakes - shock, horror... The Swedish versions look really good - maybe this woudl be a good point at which to start my pancake career?!?

A-K - haha, I had a feeling someone would say that. Well, I have a cast iron plätt-iron! That I have never used, I must admit. No, I think I'll be sticking to a heavy non-stick pan.. though I might try my friend's well seasoned cast iron pan one day and see if it makes a difference. I fry tortillas too in a regular pan :) Don't make my own though - but as soon as I can find masa, I'm giving it a shot.

Kitties are right here, meowing as they see my at the computer, complaining that I'm not playing with them instead!

Leftovers?!? You make wonderful Swedish pancakes and have leftovers?!? Not a chance! :) (I, too, have never made pancakes. Swedish or American. But my husband HASN'T forgotten how yet, so... !) Yum.

I love pancakes. I always use as many eggs as flour, and add twice the amount of milk. Then a pinch of salt, sugar and some butter. I hate frying pancakes though and I'm really bad at it, so I use our old electric table fryer which gives 6 perfect small pancakes. Everyone has their own small spatula and no one (that's me!) has to stand in the kitchen :-) By the way, Fredrik loves bacon on his pancakes - but of course! :-)

I love pancakes. I learnt how to make them completely on my own when I was 8, frying and all.

I prefer savoury fillings to sweet ones, like gräddfil or creme fraiche with chives, köttfärssås or bacon. My mum eats hers with Kalles Kaviar.

I have never had swedish pancakes,but now I think I just might have to try them.They look very good.Thanks for posting.

Anne, I will never forget the first time I tried to make plättar in a brandnew unseasoned pan. Talk about temper and tears of aggravation! How they stuck! These days I have no trouble but then I have been making plättar and pannkakor for 40+ years.

Hint: When they threaten to not hold together, whisk in another egg. A little extra protein goes a long way.

Thursday's Split Pea Soup - is that a Swedish tradition?
All I can think about when I hear about swedish pancakes is lingonberries . . . . yummmmmmmm

Give little Juliet a kiss for me - she is just beautiful -

Anne,
I just stumbled on your neck of the woods. Swedish pancakes look great, I'll have to give them a try.

Nikki, haha, we just made too many...

Dagmar - not surprised to hear it :) The pancakemaker sounds really cute, and smart - it does take a long time to fry, sigh...

mb, yep, split pea soup is a Thursday tradition :) Not that a lot of people eat it at home, but it's often on the menus of lunch restaurants and such. And in schools, too.

I have a heavy non-stick pan. I can now flip my pan-cakes mid-air :). I eat them with maple syrup.

Nice! Those look really yummy. I never heard of Swedish pancakes before this. I will have to try it once I have more time. The frying in butter part looks really promising.

They are also very nice with a couple drops of lemon juice and suger.. (something i learned in London while working as a au-pair for a swedish family)

purchase what you consider good quality vanilla beans - maybe fresh as can be organic from madagascar, slit them length wise, and slip them into a bottle of 'good quality' vodka. I use organic Rain Vodka and cap it again. Put it in a dark cool place, come by and shake it a few times every 2-3 days, and in about 6 months you have' good quality vanilla' - not processed, etc. Personally I believe this recipe is for excellent quality vanilla & since finding the recipie 25 years ago, have nevered purchased store.bought/factory made vanilla again. My aunt uses bourbon, others use congac. Your choise.

If I don't serve them with the traditional strawberry jam, I very much like a mixture of mascarpone, lemon juice and powdered sugar.

You've got to love a country that traditionally eats pancakes every thursday. How fabulous. Peas soup too, another favourite.

My Swedish grandma used to make these for me when I was a little girl growing up. Now my husband ( who is not swedish) makes them for me and my daughters about once a month on Sundays.

We ate these growing up and now my kids are making them as special treats for their kids. We use a little cinnamon sugar and a dab of maple syrup.....yum

Hi Anne - I just came across your site by accident and I'm so glad I did! You have some wonderful recipes - thanks for sharing.

This is exactly how I make my pancakes. I had no idea it was the Swedish recipe. Funny though, as I started learning Swedish last September.
Very interesting blog! Thank you for sharing so many recipes and for posting in both English and Swedish!

Anne, where is it in your recipe that you add the 1-2 Tbsp of butter? That's not the butter you use in the pan. We'll try it with the milk and see how it comes out.