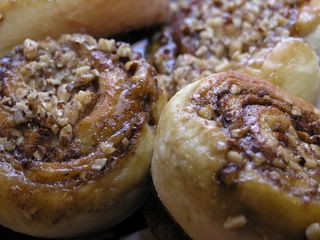 Today is the official Cinnamon Bun Day. Bet you didn't know that! Or that this is the seventh year, for this very special event. But it is. Those of you proficient in Swedish can read more here. Those of you who aren't will just have to do without. But, go out and enjoy a cinnamon bun! Or bake your own!

My favorite cinnamon bun is not a bun, but a roll, from Sweet Jill's. That's a small pastry shop on Second Street (Belmont Shore) in Long Beach, California. Needless to say, I don't eat them very often. But on my California trips, Rebecca always takes me for breakfast at Sweet Jill's, and we always get a cinnamon roll and orange juice. The rolls are huge - incredibly large, I bet they weigh a pound. And so incredibly delicious. Hey, if you're in the area, go have a cinnamon roll for me!

I baked Schnecken - a recipe from Nigella's How to be a Domestic Goddess. Deee-lish. They're different in that what I would normally put as a filling - butter and sugar - is instead made into a syrup or buttercream, and placed in paper cups. You then place the buns on TOP, bake, and invert. Nigella suggested a muffin tin, now, I have no idea how that would work. You'd need a big tin, because these are large buns. I used paper cups, which was not ideal. Some of the syrup melted and ran out. But there was still plenty. Messy. But oh-so-good. I'm not re-printing the recipe, but you can find it easily enough over at Nigella's Kitchen if you don't happen to have the book.

Here's another shot of the lovely Schnecken. And one of them pre-oven.
Posted by Anne at 09:41

Now this is a holiday that I can support. And Long Beach isn't too far - I should try and pay a visit to Sweet Jill's.

Oh Nic, please do! :) They really are delicious - I drool slightly just thinking about them.

I got an urge for cinnamon buns a few weeks ago.

Wow, it's never too early for cinnabuns in MY book. Yay! I used to work for a caterer who would take orders by the droves and make people the dough and we would just take them home and bake 'em. Easy as pie. I've been too scared to try and make my own because hers were so damn good! Not too sweet and very simple (no nuts), not the hugest fan of nuts in desserts. Mmmmm it's holiday season again!

The schnecken recipe has been at the top of my list of things to bake from that book for SO long! I can't wait to try it, and now seeing yours, I'm going to try and do it soon!
Have you tried the baklava muffins from the same book? I'm intrigued by that recipe; it also sounds so good - cooked in muffin pans with syrup in the bottom.

Mona, that's such a great idea! The dough is the hardest part.. or well, it's what takes time, anyway.

Those look great! Thanks for adding the pre-oven shot...I'm going to look up the recipe.

Hi Anne, this is so cool - I had never heard of cinnamon bun day before. But now I've just realised that in Finland they celebrated "korvapuustipäivä" on the Oct 4th as well. Maybe I should campaign for "kaneelirullipäev" in Estonia - they're popular back home, especially during winter..