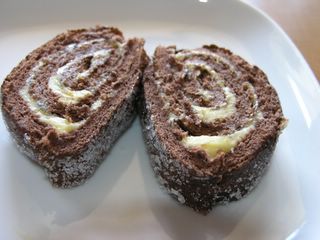 A Rulltårta - I think you call it roly-poly in the UK - is a very simple cake to make. In theory. However, it's been one of the most frightening things in the world for me. I don't really know why, but it's always seemed to be to be a fiddly method, and a lot of opportunity for disaster to strike. Per's aunt Pia makes a great jam-filled Rulltårta (Rulltårta = roll cake, very simple translation) so I asked her to share her secrets. Which she did. So, I'm now trying my hand at my first Rulltårta ever. My favorite flavor has always been Drömtårta, which means Dream Cake. It's a chocolate bottom, filled with vanilla buttercream. Delicious. Again, in theory. You can buy it ready made, but those are generally nasty, made with butter substitute and tons of preservatives. My grandmother made a wonderful one, and that's what I was hoping to recreate.

And the verdict? Yes! Yes! This is really, really good! And it *did* turn out fine. Just look at it. Pretty, isn't it? Now I can't wait to do more Rulltårtor, maybe even eventually tackling the one called Budapesttårta, which is more of a nutty merengue bottom, rolled up around whipped cream with fruit. Ok, that does sound more difficult, doesn't it? Maybe another time.

Preheat the oven to 250 degrees C. (480 F) Using a Kitchen-Aid, or at least an electric egg beater, beat the eggs with the sugar until very fluffy and pale. (About five minutes.) Sift potato flour, cocoa and baking powder into the eggs, and fold together carefully. Pour onto a greased baking paper placed into a large roasting tin, and shape into a rectangle. Bake for five minutes - watch it carefully so it doesn't burn!

For the filling, beat all the ingredients together until you have a soft, uniform butter cream. Set aside.

When the cake has baked, take it out and invert onto a sugared baking sheet. (Which you prepare just by pouring regular sugar onto a sheet, simple as that) Remove the paper that the cake was baked on - if it seems to stick, brush it with water and it should come off easily. Invert the roasting tin over the cake, and let cool. (That's so it doesn't dry out.)

When it's cool, spread the buttercream on it (a plastic spatula comes in handy), and roll up! Simple, huh? I can't really understand what I was so afraid of. Both the inverting and the rolling went fine. (Well, sort of. That was the hardest part, it was very near cracking in some places.) And I ended up with delicious cake.. that incidentally keeps well for a few days in the fridge, or a bit longer in the freezer. But don't leave it out - it will get dry and stale in no time!
Posted by Anne at 09:04

Wow! Nice. I think we call it the Swiss Roll over here in Malaysia

It does look pretty indeed. I have a similar fear of making a roly-poly - I'm sure it'll crack when I roll it, or gets stuck on paper whatever. And yet I know it should be simple.. I've got a lovely sounding recipe for a rye flour based roll with lingonberry & icecream filling that I've been thinking about for ages - maybe it's time to give it a go..

It's a swiss roll in the UK too.

I was taught to make them using tea towel to roll them up.

Looking at your blog has made me want to get a digital camera so that I can record my successes and failures too.

I received a recipe for Rulltårta from my mother in law, a few months back. It is vanilla cake with chocolate buttercream (a dash of coffee in the buttercream).

For the record - In the States (to my knowledge): Swiss Roll or Roll Cake

Hi Anne
They are Swiss Rolls in Australia too, but I am sure we make them with plain flour and not potato flour.. cool