Finally, some pictures from Dalarna 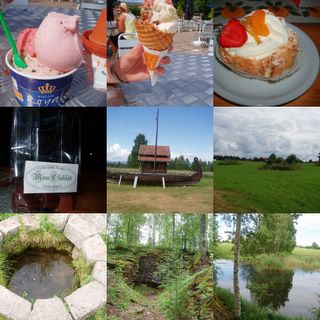 It's been a while since we got home, but there's been so much else to write about! Anyway - here are a few pictures from our trip to Dalarna, which is in the middle of Sweden. We tend to think of it as the north, but it's not really. Sweden is *so* long, and although I tend to think that I live in the middle, I'm really in the south. Dalarna is a beautiful place - we have a cabin on Sollerö island which is in Lake Siljan. Gorgeous place.

And so thought the vikings. It's been established that there were vikings living on Sollerön, and they have found a lot of artefacts. We went on a lovely walk around a part of the island, which was routed to show the old viking graves. You can see them in the third picture, middle row - see those mounds? Burial mounds.

The first row of pictures - first two are our ice creams that we got in Mora. Excellent! Per's has.. orange and chocolate I think, and I went for their Italian gelatos, and picked cherry, stracciatella and wild strawberry sorbetto. Mmm! The third picture in the first row is a budapestbakelse, a rolled hazelnut merengue bottom with cream and fruit. This particular one comes from our favorite bakery in Mora, Helmers Konditori. We always go there, and everything they have is great.

Second row of pictures - first one is chocolate from Mora Choklad. They make chocolate filled Dalecarlian horses, but that's not what I was there for. I wanted to try an assortment of their regular filled chocolate. They were all really good - my favorite was the Zorn, named for a famous Swedish artist. It had a hazelnut whiskey truffle filling.

Second row, second picture - this is a Viking ship. Not the real thing, but a smaller model.

Third row - first we have a picture of a small spring. It's very, very, very old, and said to never freeze in the winter and never run dry in the summer. It was used for old heathen sacrifices. A very special place, it has a fairly spooky atmosphere. Second picture is of an old mine on Sollerön. It was believed to have silver, but they never found any. Third picture is of Agnmyren, a small swamp. It used to be a part of Siljan, but became a lake in the Viking age. At the right time of year, there are millions of frogs here! I've never managed to go there at the right time though - maybe next year.

Foodwise, I've been inspired by two recent memes to try two new recipes. Both were huge successes, and I strongly urge you to try them too! First one out was Linda's Earl Grey Cookies. Amazing flavor! At first bite, they're just like any other butter cookie, crispy and delicious - but after a second the tea-taste sneaks up on you. Mm! Really good. I'm bringing them to a picnic tomorrow, so I only tasted two, but next time I want to make some and have with hot chocolate. Something tells me that's a great pairing.

And then this morning I made McAuliflower's Crispy Eggs. I read all the EOMEOTE (End of month eggs on toast extravaganza) posts, every month.. but nothing has really called out to me before. I'm just not a huge fan of eggs and toast, together. Eggs, sure - I have a boiled egg for breakfast just about every morning on vacation or on the weekends - but not on toast. Or with toast. No. Except for now. This recipe is incredible. It involves making flavored breadcrumbs (garlic, parmesan and basil, in my case), mixing with a bit of olive oil, frying and adding the eggs. Yum! I'll be making this many more times, that's for sure. And the hilarious Harry Potter-esque post is worth a visit, even if you don't like the sound of the recipe!
Posted by Anne at 09:53

Thank you for ahring the pictures. it looks as though you had a lovely time.

Glad you enjoyed the Crispy Eggs :)