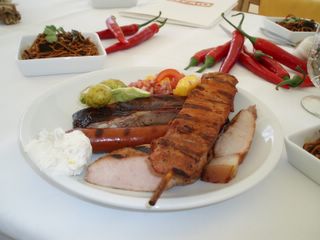 I told you a few days ago about the cool release party for Scan's new grill products, but I didn't talk so much about the food. Well, I won't go into details now, either, but the biggest hit was something called "Mammoth Steaks". It's large pork chops, without bone, and the big surprise: they were really juicy. They come pre-marinated, and you just toss them on the hot grill for a few minutes - instant success. It's what I'll be having tomorrow for my birthday party, along with some other stuff. 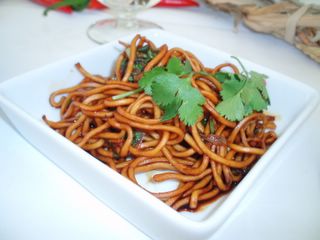 This was a really tasty noodle salad with a lime-coriander dressing. Will make it myself and post the recipe - definitely!

They also released a new spicy sausage - this time, it was an Andouille. I don't know if it has all that much in common with a *real* Andouille, but since this is the closest I come (unless I make it myself), I'm still quite happy with it.

Ok, now time to unpack a little bit more.. give me another week, then I promise to have the blog back in shape :)
Posted by Anne at 13:24

Have a great day tomorrow, Anne.

Happy Birthday for tomorrow, Anne. Hope you are given lots of lovely things. P.S. Love your blog :-)

Have a wonderful Birthday celebration. May all of your wished come true =)

Thanks everyone! I was a *bit* early, my birthday is actually tomorrow, May 21 :) But celebrations are tonight!