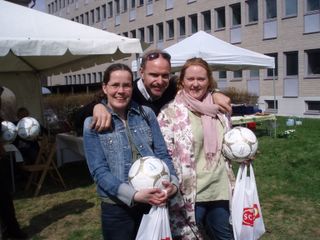 I've put this post off for way too long. See, a couple of weeks ago, I was invited to a launch at Scan, Swedish Meats. They were releasing some new products in their barbecue line - a line I wasn't really aware of, I have to shamefully admit. See, living in an apartment, we never did much barbecuing since it was always too involved. Now that we have a house however, I'm looking forward to doing a *lot* more grilling. Anyway, Scan had a lot to say. They had done a survey of the Swedes barbecue habits, showing that in most homes, men are in charge of this particular cooking task.

Barbecuing is intimately linked with summer, for obvious reasons. (Even though, sure, some people barbecue all year round.) What else is linked with summer? In Sweden, one answer is bound to be "soccer". Especially this summer, since it happens to be time for the World Championship. Hence, Scan has decided to link "soccer" and "barbecue", and because of that, the spokesperson for this launch and for their commercials is the guy you see in the top photo, between me and Kristina from Clivia's Cuisine: Thomas Ravelli. Swedes reading this should know him, and perhaps a few soccer enthusiasts. (He's a goalie, the one who was chiefly responsible for Sweden winning the bronze in the '94 championships.) We each got signed soccer balls, by the way, very nice.

I'll talk more about what we ate in a few days time, we also got a recipe collection to take home. For now, some more pictures: 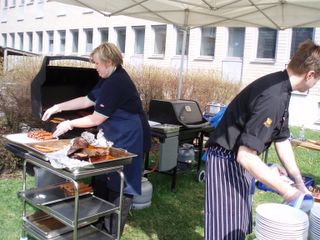 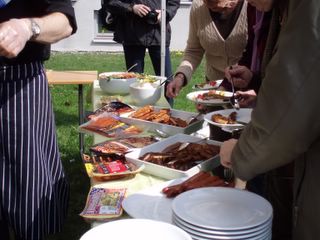 You are right... summer equals BBQ and I love it! Happy grilling in your new home!

Lovely and just in time, summer and a new home and new kitchen. Enjoy.