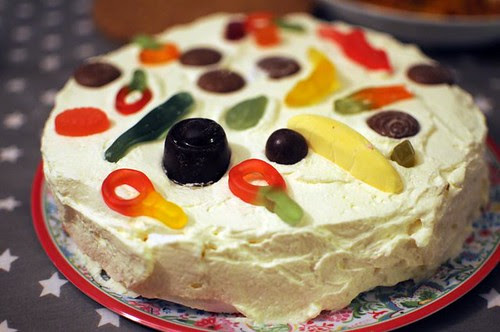 Eight years! It's actually pretty impressive. I've been blogging for a LONG time. And I still love it. I've cut down a little, but that's ok - I hope most of my readers don't mind too much. In this past year, I've stopped updating my swedish blog, but again, I think that's ok. And I have a LOT of not-blogged-about-yet recipes to post, so I promise a lot of tasty updates soon! (-ish)

Why I still do it? I guess an e-mail I got tonight pretty much explains it. It's from a reader who made my ruby red beetroot risotto. And she cared enough to actually write me to say how much she enjoyed it and how good it was. I love that. It's not the only reason for blogging, but it sure is a (big) part of the puzzle. 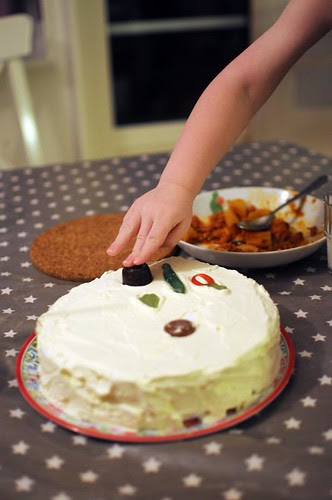 So, cake! I bought a cake last year. And the year before that, I never made one either. So this year, I figured I should at least make one, even if it took minimal effort. Titus was excited at the idea, and immediately decided that it should not have any kind of berries, but instead be decorated with candy. 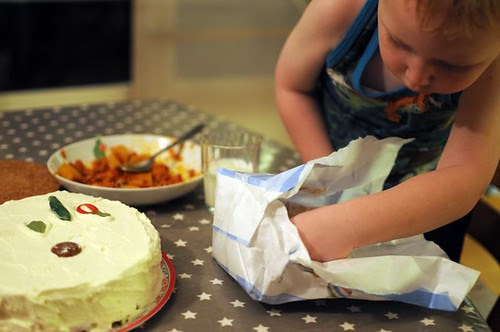 Being lazy, I bought meringue layers (but in hindsight, I should totally have baked a chocolate cake, it'd have been SO much better) and filled them with a simple hazelnut mousse (made from an awesome hazelnut paste, think Nutella but sans the chocolate) and sliced bananas. Then some whipped cream, and I let Titus have free reign over the candy decorating. Of course. 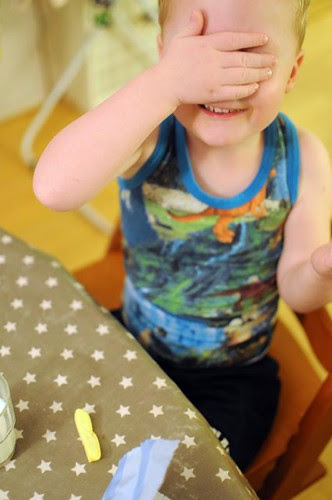 Email ThisBlogThis!Share to TwitterShare to FacebookShare to Pinterest
Labels: cake

Happy birthday! Your blog was the first hope for me, once we moved to Sweden, remember? :D

Eight years, yes that is impressive. Looking forward to seeing what the next year holds in store for your blog and recipes! Happy birthday!

Happy Birthday to your blog!! The cake is cute!

Happy Blog-Birthday, Anne! Eight years is quite a long time (I've only been following for about 5 years, and that's even a long time!). I'm glad you still enjoy blogging, because I still enjoy reading your blog. Very often I come back to find an old recipe that you have posted and I'm so thankful that you're still here for me to find! I wonder why you haven't updated your Swedish blog? Not as many followers as the English version? Thanks for all you do!

Happy blog anniversary, dear Anne! It's been a joy following your blog over those years!

Happy, happy blog birthday to you Anne! Here's to (at least) 8 years more:)
Blessings + thanks,
Aimee

Thank you all so much, it's really the contact with lovely people like yourselves that make blogging so much fun :)

Logan, I ran out of steam! Publishing just took so much work when I had to do it in two languages, and it felt more like a chore than like fun... so for now, mostly, the Swedish blog won't be updated. I still have some drafts that I could publish and I will, but it won't be very often. It has a lot less readers, and pretty much all those readers know English anyway. It's been fun doing both but not right now.

Glad födelsedag till AnnesFood! It has been a fantastic 8 years! Tack tack!

I have been reading your blog for years and as a Brit living in Malmö (Sweden) I love both the international recipes and your take on the traditional Swedish fare. I never post usually but your blog is so warm and endearing and to see a picture of a cake your son decorated made me realise how much your writing inspired me to try your recipes.
I hope you and your family/pets have many more happy blogging years to come.

Happy belated bloggiversary! I've tried many of your recipes (the latest having been the pasta with orange and coppa di parma which by the way is great as a gratin the next day if you have leftovers) and got many of my food-loving friends to follow it, too.