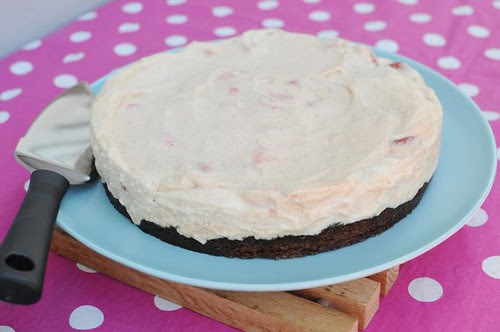 Here's the dessert I made for Fourth of July this year.  I found the recipe - like almost all the recipes I made this year - over at the Homesick Texan. Awesome blog, awesome book.

Seeing it listed in her recipe index, I have to admit I had my hopes for a jello-based strawberry dessert with whipped cream - something I've only had once, at my friend Rebecca's then-boyfriend Greg's home. His grandmother made it for special occasions, and the recipe was well guarded. I don't even like jello but that was indeed something special. If anyone knows of something that might be it - do let me know!

Alas, this was very different, of course - and I'm sad to say it didn't turn out all that great. The crust became really hard and thus super-difficult to slice, and the topping was tasty but hard to eat it, with large chunks of frozen strawberries. Next time, I'll slice them a lot smaller. I did add fresh vanilla to the filling, which was really tasty.

Add the first five ingredients to a food processor and mix the pecans are finely chopped. Add the melted butter and whizz for a few seconds until the mixture starts to clump. Press into a springform pan,  mine is 24 cm in diameter, and bake at 175°C for 15-20 minutes. It should get a little color but definitely not too much.

Cut the berries into small pieces or slices and let them macerate with the brown sugar, juice from 1/2 lemon, the ginger and the scrapings from the vanilla bean for an hour or so.

Beat the egg whites with 4 tbsp of sugar, until you have a stiff and glossy meringue.

Beat the cream with the remaining tablespoon of sugar, until fluffy. Fold in the berries, and finally fold in the meringue.

Spread the filling on top of the cooled crust. Freeze over night. Let it thaw a little before serving.

It looks really good though. Maybe you needed to thaw it for longer before trying to serve it?

Oh - and I think the dessert you are describing sounds like something I've heard called "Strawberry chiffon pie".