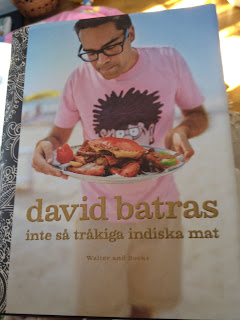 These days, I rarely buy cookbooks in physical shops anymore. I research, then order online. And I get some review copies from publishers, too. But this book really caught my eye, and before I could help myself, I paid for it and left. (well, I did start to look up the price online, but couldn't get a good connection. Besides, you should support local book shops!)

Apparently, he cooks a lot in his spare time. His dad is Indian and this book is filled with David's own favorite recipes. Some are from his dad or his aunt, many are his own take on Indian classics. All are quick(-ish), and can be made with ingredients found at almost any supermarket.

Photos are pretty, and plentiful. I've read half the book and already planned next weeks menu. So, in short: two enthusiastic thumbs-up!
Posted by Anne at 16:05