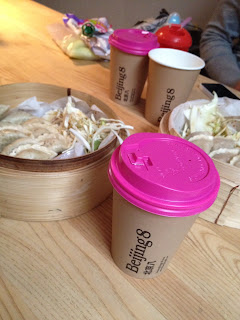 Me and Dagmar finally made it to Beijing 8, one of several dumpling restaurants that have popped up quite recently in Stockholm. We tried the pork and the chicken dumplings - they also had duck, salmon, and veggie, but you couldn't split your order which I found mildly annoying. Chicken was really good, a bit spicy. Pork was mild and juicy. The plum-ginger dipping sauce was great but I wasn't a big fan of their cilantro-chili.

There are some interesting side orders on the menu, which is good if you're hungrier than we were. As it was, we were headed for gelato at StikkiNikki afterwards...
Posted by Anne at 14:20