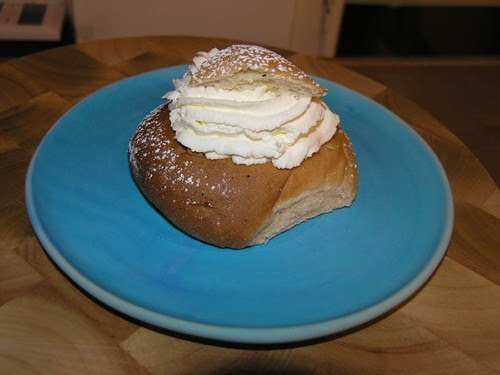 Today is shrove Tuesday - the last day to fatten up before lent - and in Sweden, we prefer to do that with Semlor. We're talking about a yeasted bun, flavored with lots of cardamom, filled with almond paste and whipped cream. It's finished off with powdered sugar. And as if this wasn't enough, many people like to eat theirs in a bowl of warm milk. (Which I personally find rather off-putting.)

I was going to make my own this year. Really, I was! Except, well, umm.. no, I didn't. At least I haven't yet - I might still make them before Easter, but I just don't feel like baking today. (Good thing I didn't make my foodie resolutions yet, huh? Which by the way, I totally should.)

I've written about semlor before. And if you're looking for pancakes instead, I wrote about lovely Swedish pancakes last year.

Today is also Super Tuesday, which is a much bigger event as far as world affairs goes. I obviously can't vote in the US election, but if I could, my vote would go to Hillary.
Posted by Anne at 15:34

I can't vote either so Semlors and pncakes are of much more interest to me today too. Here's to Fat Tuesday, not Super Tuesday!

Yes, I must stop procrastinating and go to vote.I naturally will vote for my neighbour Barack Obama! But whoever wins the promarys and elections,I welcome change.

Semlor is the best! I right now have 12 fresh baked buns just waiting to be turned into semlor!

Well.. Not all 12 at the same time maybe.. I think some of them have to go into the fridge instead =) But maybe three or four of them will be eaten today!

Yes, here it is "Fat Tuesday" or "Mardi Gras". I'm going to give up sacrifice for lent.

I am allergic to almonds so I make mine with a thick custard but you'd be damned if you touch my warm milk!!!!!!!!!

Here they are called "laskiaispulla" and filled with whipped cream and marzipan or strawberry jam. It's interesting to see these different, yet similar, Shrove bun recipies from neigbouring countries!

The buns look delicious. I'll forgive you for the Hillary comment. :)

Wow - have never heard of semlor but they certainly seem to have the edge over boring old pancakes :) And with enough of them it certainly will be a Fat Tuesday :P

Am a student in Sweden. Thankyou for your page. Had my first semlor yesterday and I didn't know about the almond paste until i first bit into it! What a surprise!

If you haven't made NY resolutions that's fine, Chinese New Year has just past, and you can make your resolutions for the luna calendar... happy cooking.