Time for the semla! 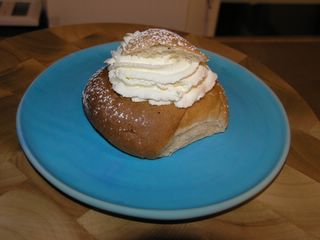 Today is the national semmel-day in Sweden. Everyone, more or less, eats semlor. And what is a semla, you might ask? Well, take a look at the picture. That's a semla. It's basically a yeasted puffy bun, usually flavored with a hint of cardamom, filled with almond paste and whipped cream. It's assembled by cutting a lid off the bun, setting that aside and scooping out some of the inside of the bun. The insides are mixed with some almond paste (and maybe some milk to loosen the mixture slightly), and put back into the bun. (Not too much - you don't want a sugar overdose here.) Top with whipped cream, put the lid back on, and dust with powdered sugar. I don't generally make semlor myself - it's easier to buy, since you can just eat one... Unless you have a big semmel-party that is. I don't know that anyone does.

So, why the semla? Well. Today is the last day before lent. Not that anyone acknowledges lent here anymore, but back in the days you had to stock up on your fat before lent. Hence the semla! Indeed, this day is called fettisdagen, translated into fat-tuesday. One of our kings died in 1771 from eating too many of these delicacies. Not so much because of that, but as a nod to tradition, semlor used to only be available for a very short period each year. Nowadays, you can get them all year round, but they're especially widely available from christmas to February. I've already had two this year, and with some luck, I'll have my third and last one waiting for me when I get home tonight. Then it's no more semla until next year!
Posted by Anne at 13:19

Oh, another post about Semlor :-) You can never get to much of those sweeties. I'm rather sad that we didn't get any at work today. We were hoping that our boss would order some, but nope...