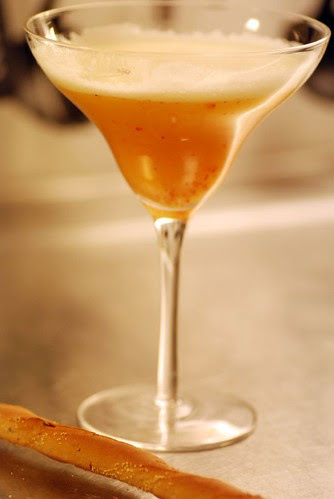 It's that time of year again! Twelwth Night in Sweden is Trettondagsafton - "Thirteen-Day-Eve", and what better time for a great gourmet dinner with your friends? We each made three dishes (I also made a drink and a snack) to make a total of thirteen dishes, tasting-menu-style. This year, we also managed to keep the portions as small as they needed to be, which was definitely an issue last year.

So, without further ado - here's our menu. Up top you have the Pineapple Chili Margarita, from Mesa Grill Cookbook. I used more juice and less pineapple, and probably a different type of both chili and tequila than what Bobby Flay had intended, but it turned out very good nonetheless. 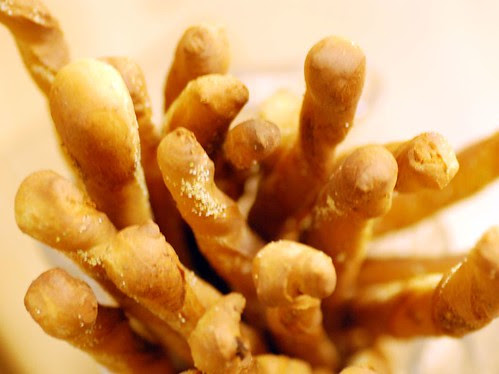 Served with this was his Mesa Grill Pretzels, or as I prefer, Jalapeño Breadsticks. I didn't use roasted chillies in mine, but instead a chipotle chili paste. There's also a whole head of roasted garlic involved, and generally very little effort. I'll share the recipe soon. 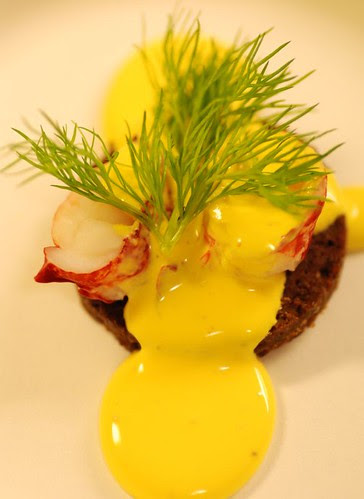 The first appetizer: Lobster on Pumpernickel with Saffron Sauce. Delicious! Dagmar made this. 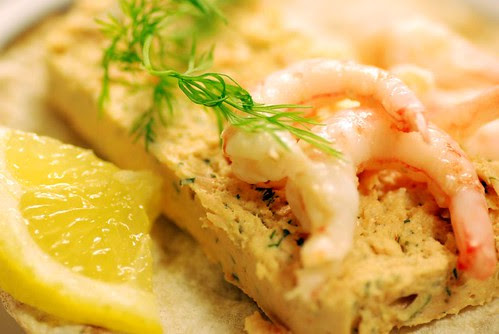 Next, Lena's Salmon Mousse, served with fresh shrimp on a round of crisp bread. Very tasty! 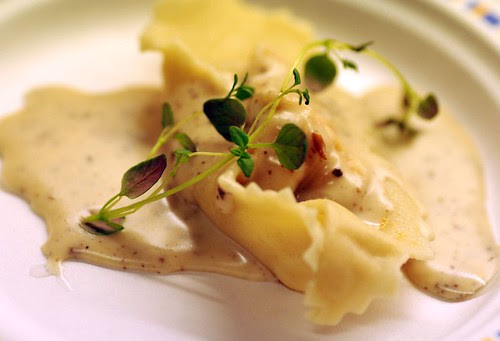 Then, Tesse's tortellini, filled with a mixture of cheese and bacon, and served with a Cheddar-Chanterelle Sauce. I could have eaten just this for the rest of the night and been happy. 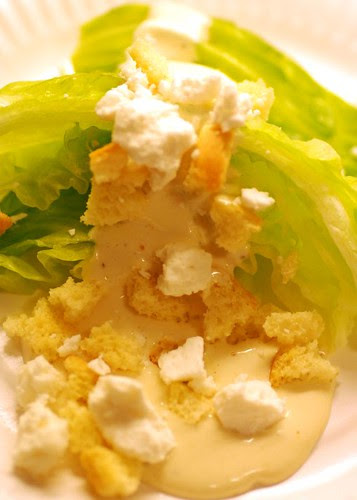 My appetizer was this Frozen Lettuce, from "The New Art of Japanese Cooking". It's sort of a take on Caesar Salad, in a very different way. I loved it - it was really different and unique, without being over the top. (Recipe to come.)

We had a lovely French white wine with the appetizers - Les Fumees Blanches. We then moved on to red wine, Opal Springs from Australia, and the main dishes. 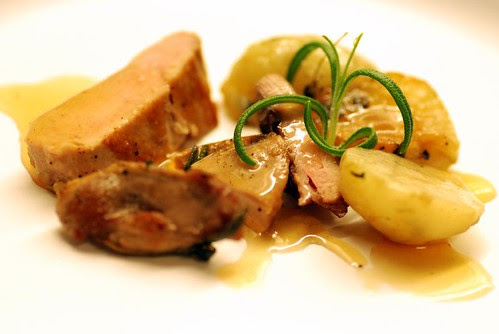 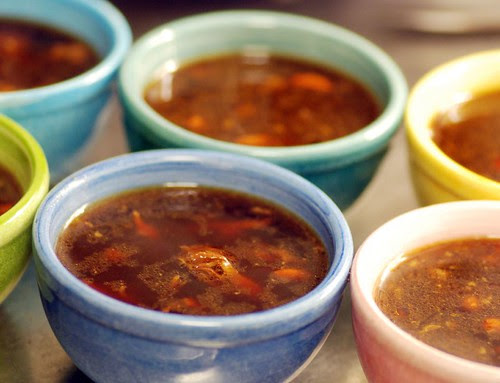 Next, I made a soup from Lisa Förare Winbladh, called Bak Kut The. (From her book "Ditt Nya Skafferi".) It's apparently a Cantonese health soup - perfect to battle colds. It was indeed excellent, and I'm happy to say that I have lots of leftovers since we served it in tiny bowls. Recipe to come, soon-ish. 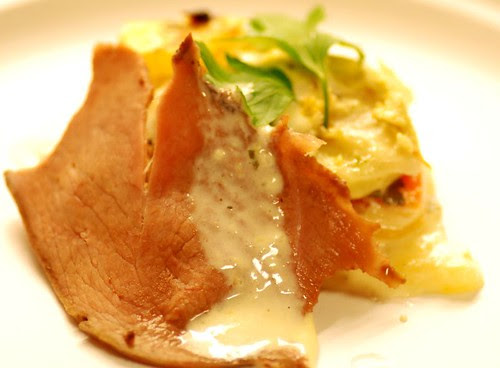 Dagmar served "frost bump" from moose, with a wonderful gratin from potatoes, carrots, jerusalem artichokes and other root vegetables. 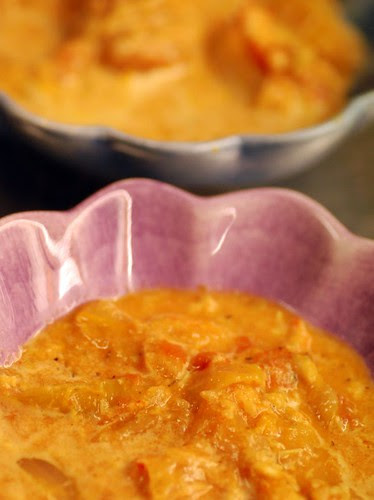 Final main course was another soup, Lena's intriguingly named "Red Sea Soup" which turned out to be a creamy tomato soup with crawfish tails and crab. Yum! 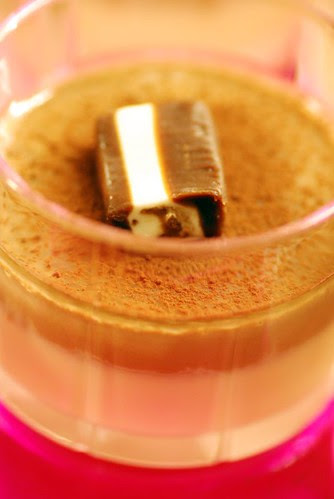 On to desserts! I was first out and served a chocolate mint pannacotta, topped with mint jelly and a chocolate-mint caramel. Amazing! And I'll be sure to share the recipe, which is from Elisabeth Johansson's book "Lakrits Mint & Choklad" that I have previously reviewed. 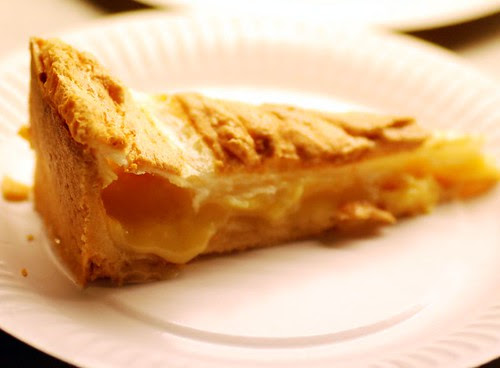 Lena served a Lemon Meringue Pie, that was deliciously sharp and sweet at the same time. We had a small glass of chilled Limoncello with it, which nicely polished off my last bottle of homemade stuff - I'll make more in time for summer. 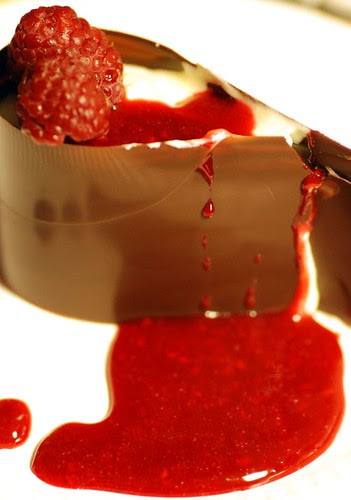 Tesse had gone all out in making these beautiful Chocolate Drops with White Chocolate Mousse and Raspberry Sauce. (Don't lick your screen!) 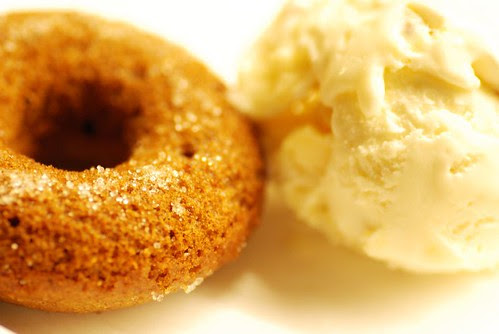 You can find recipes eventually at Dagmar's blog, and at Lena's (in Swedish). Tesse unfortunately doesn't keep a blog - she should!
Posted by Anne at 11:57

It looks so nice, all of it! I am especially interested in your strange Caesar salad, I look forward to read how you made it.

Wonderful! Where do you find the recipes? Merely the names of the courses makes me hungry! And I am waiting ... longing for frozen lettuce :)

Wow...what a terrific line-up of foods for a special evening with friends. I hope that we will get some of the recipes as they all sound delcious. What caught my eye the most though was the white chocolate mousse with raspberry sauce!!!!!!!!!What photography!!!

Holy cow. Talk about over the top food. How long did it take you to eat it all? Fantastic.

Why if I didnt know it was a home dinner party, I would have thought you were dining at some high end restaurant like F12 or something. Just spectacular!

Thanks for yesterday! We had a lovely time and the food was amazing! The photos look great!

you're really making me crave bak kut teh now - i'm quite surprised it was in a recipe book - it's a very "home style" dish. my grandmother used to have to trick me into eating it when i was little. like so many things, you learn to love them as you get older!

What a wonderful event. The pictures are gorgeous; just looking at them making me feel full and like taking a nap!

I’m not thzt much of a online reader to be honwst but your blogs really
nice, keep it up! I'll go ahead and bookmark your site
to come back later on. Many thanks