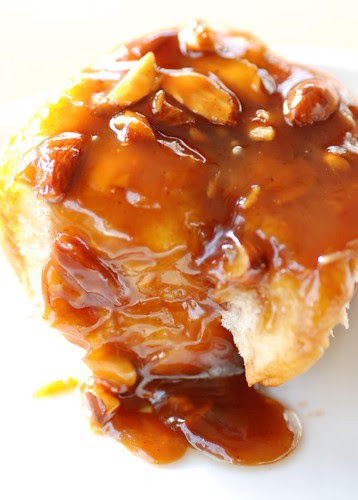 Ah, time for another Daring Baker's challenge! As someone who more or less grew up on cinnamon buns, I won't say that this month felt particularly daring - but fun nonetheless.

Swedish cinnamon buns differ from American ones - mostly in that they're usually smaller and individually baked in paper cups rather than in one pan, and that they never have icing. Instead, they're often topped with pearl sugar, and/or flaked almonds. The dough often contains cardamom (and I've never come across one with lemon peel, as this one had) and there's always, always lots of butter smothered on the dough rectangle before it's sprinkled with sugar and spices, and rolled up. 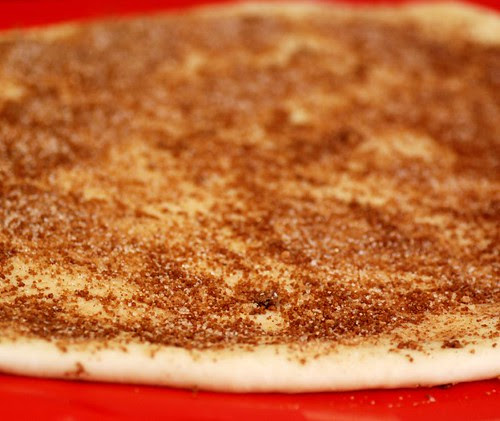 I learned to appriciate the American variety while living in Long Beach, CA. There's this little place called Sweet Jill's on Second Street, with the very best cinnamon buns ever. In fact, I drool a little just thinking about them. They're just huge - I bet one of those is probably enough calories to last an entire day. But what a wonderful treat to have once in a while! To have breakfast there at least once is an absolute must when I visit California. (Which really isn't often enough!) 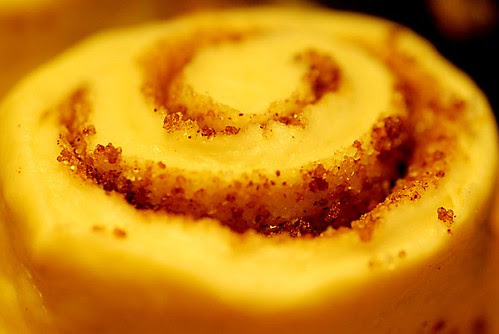 Marce who chose the recipe from Peter Reinhart´s The Bread Baker´s Apprentice told us to use whatever spices we wanted. I went the easy route and used a ready-made spice sugar with white and brown sugar, cinnamon, cardamom, cloves, vanilla and nutmeg.

You can find the recipe on Marce's blog, here. I opted for sticky buns, and I admit that I only made half the recipe - I was much too afraid that I'd eat them all! (Per is not a caramel fan.) And as I don't have anything called instant yeast, I just used normal fresh yeast - about 10 g for half a batch turned out to be right. I added a bit more flour than stated in the recipe to get the right consistency for the dough. 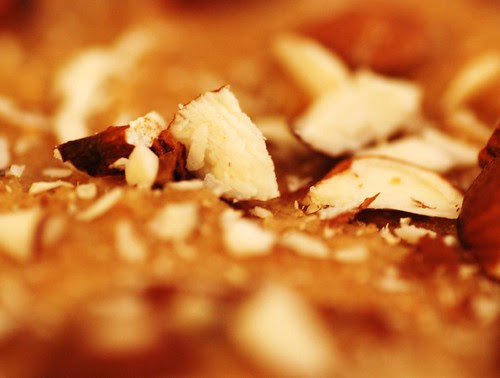 I got nine buns out of it, and it fitted quite nicely into my 8-inch square pan. I also made half a batch of the caramel topping - but oh my god, that was some seriously good stuff. I had to forcibly keep myself from eating it with a spoon! I also added some roughly chopped up almonds, but I skipped the dried fruit. 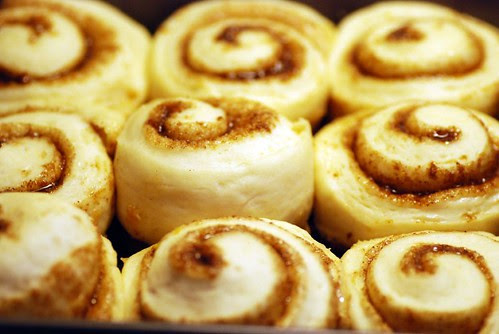 And the results? Well, while certainly very tasty, I have to admit that I found the dough itself a bit plain - and I missed not having cardamom in it. I also didn't like that the top of the buns - which became the bottoms, as the sticky buns are baked wrong side up - became a bit too dark and crispy. I prefer my buns pale and soft, so if I made this again, I'd probably cover them with something. The caramel glaze was delicious though - and I think it photographed beautifully! 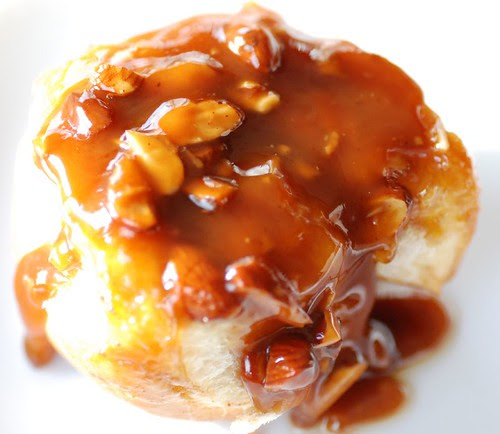 Will I make them again? No, probably not. But I should make regular Swedish cinnamon buns soon - after all, October 4th is the official Cinnamon Bun Day in Sweden! That's how much we love them!

Don't forget to see what all the other Daring Bakers thought of this!
Posted by Anne at 09:59

you're right, they look great in your photos!

They look amazingly yummy on your photos!! I also missed the cardamon in the dough and the butter in the filling. But the caramel glaze is lovely!!!

i have read a few other posts that compare (or contrast) these to the swedish version. they sound so good--i need to find a swedish bakery or a recipe to try! your photos do look great!

Your photos are excellent! They really bring out the deliciousness of these buns!

you have captured everything beautifully :)

Wonderful buns Anne! I'd have helped you eat them, and would have been happy to bring my own spoon. Save you from doing any extra dishes.

Your buns *did* photograph beautifully. The caramel looks great - it's tempting me to get back in the kitchen and make another batch!

Your photos **did** turn out beautifully! I'm really jealous of your caramel, it turned out perfect!

Wow they look wonderfully sticky with all that caramel glaze.

Your buns are just gorgeous! I've read quite a few comments about the Swedish ones ... have you ever made them for your blog?

That caramel DOES look really tempting! I didn't make the sticky buns, but now wish I had!

Your photos are excellent! And I agree with the whole idea of slathering the dough rectangle with butter. I'm seriously going to try that next time. Yes, I also had trouble not eating that caramel cream while I was making it. Goodness...a fun challenge, indeed.

Anne,your caramel looks so perfect, and I know what you mean. I took my buns out when they were still nice and soft but the caramel was still a little too sugary. I am a fan of spices so I would probabley add cardamom or lemon peel to any further batches

every time I encounter another sticky bun, I wish I made them. The flowy gooiness in your photo puts this over the top delicious. Fantastic job, Anne!

Your sticky buns are gooey deliciousness! And I didn't know you had a sticky bun day - how great is that!

Ivonne, strangely, I haven't! I made Nigella's Schnecken buns once, but I really haven't blogged about a proper Swedish cinnamon bun recipe. I really need to remedy that! Maybe not in time for National Cinnamon bun day though, but hopefully soon thereafter. I just really, really need to get some freezer space freed up first! :) (Or a party planned - hey, I *am* hosting a Tupperware party in October, that'd be pretty perfect!)

My mom used to make Swedish cinnamon all the time (not sure of the correct spelling an dpronunciation), not that she has any Swedish origin but out neighbor was and she got us hooked n them, and I agree I tend to like Swedish one better.
The pictures are beatiful!

Your buns do photograph very nicely. I've been reading about the Swedish versions from your blog and a few others today and will have to try a Swedish recipe now! Great job this month

I did put cardamon in the sugar when I did the stickies, liked it a lot. Loved the lemon in them. My usual also does butter the dough before the sugar and I think this would benefit from it although this dough is so delicate you'd have to use melted butter don't you think.
That first picture is a killer - heavenly gooey!

they look fantastic with the gooey caramel and everything. I agree with you, I added cardamom, ginger and allspice to the basic cinnamon sugar and it was incredibly tasty.

I definitely need to try cardmom, and am now pretending to be Swedish so I can celebrate Cinnamon Bun Day!

A whole day just for cinnamon buns - now why don't we have anything like that in England?!

I agree they do photograph beautifully. I have to confess I couldn't get enough of the sticky buns and yours have me drooling all over again.

MyKitcheninHalfCups - well, I don't know - mine wasn't really all that delicate! I think I could easily have smeared some softened butter on it! :) (I did add a bit more flour, it was unbearably sticky at first.)

The Swedish buns you describe sound great! I love that you used almonds on yours as well!

Beautiful pictures, Anne! What kind of camera do you use?

They look amazing! I am drooling....

Wow, those buns look so yummy! I dearly love caramel, but for some reason I've never been a fan of sticky buns. I think your photos may have just converted me...

I Love your photos ~ the buns look GREAT! Good Job!!!

I love the sound of your cinnamon sugar, Anne - very, very tempting! And I agree - my usual cinnamon dough recipe (from a Swedish baking book, of course:) is much nicer - the cardamom really belongs to kanelbullar dough! So you'll be posting about cinnamon rolls in 3 days again?

Pille - oh, I really don't think I can find the time for baking that soon.. but then again, maybe I should make the effort. We'll see! :)

Love the pic with that drooling sticky topping...gosh, now I really have to make them. Again! Perfect pics!

Your sticky buns came out brilliant! :)

It's great to see a lady who knows just the right amount of caramel to use! It looks fantastic!

Beautiful! I enjoy your blog!

I love your recipe for "spice sugar". I'm hosting Thanksgiving brunch this year, and these cinnamon buns -- with your spice sugar, raisins and apples, and a little cardamom in the dough. It's also neat to see how breakfast pastried vary across the continents... it's clear they're connected, but each community adds something to make it their own. Thanks for sharing your experience!

They looks so good, well done :)

These look great. The carmel turned out a very pretty color!

Anne - Thank you for sharing with us the difference between Swedish and American cinnamon buns. I have been reading Beatrice Ojakangas' "Scandinavian Feasts" these past months (over and over again, I mean; I'm not a slow reader) and my pulse quickens at the mention of cardamom in buns. I will make them - soon, I hope - but I hope you share your experience with us on October 4. Where is Sweet Jill's on Second Street? I know that street pretty well..Is it the store that also sells frozen yoghurt and many sweet treats?

These are some amazing pictures! I would love to try some Swedish cinnamon buns, they sounds very good...and this recipe looks very good too!

Your caramel looks absolutely delicious! I'd love to see the recipe for the Swedish cinnamon buns!

I haven't been a cinna-bun fan...its something to do with cinnamon, not the buns:) but I have to agree your recipe looks delicious!

fantastic!! i love how much caramel they have. great job on the challenge!

Reading through all the Daring Baker posts, I'm coming across so many references to Swedish cinnamon buns. I didn't even know that was a thing! Your sticky buns look great, especially with all that oozy caramel.

Ok - it's clear that now I really do have to bake some buns for Thursday! Per volunteered to take some to work with him, so now I suppose I really have to do it! :)

Shaun - I *think* they have frozen yogurt, too. It's pretty much towards the end of 2nd street as I remember it, towards Naples. I hope it's still there! :)

These buns made my eyes pop out! I want to go swimming in your caramel!

Your buns look delicious. I love the photo of the oozy caramel. I love that Sweden has a Cinnamon Roll Day! How fun! Wendy

heck yeah those caramel ooey gooey buns photographed well! So well it's going to cost my boss a new keyboard because I'm drooling all over this one! heee!

Your buns are looking very gooey,yum!
But I totally agree with you, even though I liked the caramell glaze very much I think it is a shame to bake them up-side down.