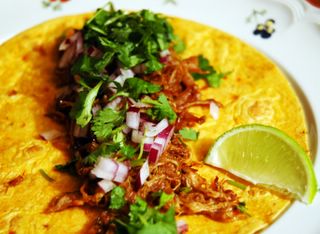 I found this recipe originally at Alaska Cooks, but I'm posting it here too, so that I may never lose it. (I changed a few things.) Because it's that good. Great when you're sick of tacos, but want something with a mexican vibe. The meat is so unbelievably juicy and flavorful, but it's also very rich. Squeezing over a little lime makes it just right.

Remove any visible fat or stringy bits from the pork, and cut it into a few smaller pieces. Heat the oven to 125°C. Mix the spices and the sugar on a plate, and roll the meat in this until well covered on all sides.

Heat the oil in a large pot, and fry the meat until browned on all sides. Cover with a lid and put in the oven, for about an hour. Then add the garlic, the milk and the coca cola, and let simmer for another hour. The meat should be extremely tender and easy to shred.

Remove the meat, and shred it. Put the pot back on the stove, heat the liquids and fry the meat shreds until all the liquid has evaporated and the meat is slightly crispy.

Recipe in Swedish:
Carnitas
Posted by Anne at 10:56

Anne, this sounds weird and wonderful--milk and Coke??!! I'm going to trust you on this one and give it a try...

Milk and Coke, how funny! I love carnitas!