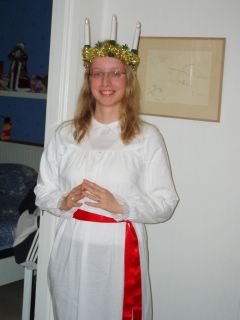 Today is Santa Lucia Day in Sweden. Sweden is a very very dark country, so for us it’s very natural to celebrate when the days start getting longer again. This is technically on a different day every year, but traditionally, it’s celebrated on December 13 with Lucia. Learn more here.

In the picture, you can see Manja being a very traditional Lucia. This was taken Saturday night at Lena's place, when she had us over for traditional christmas rice porridge - also called Santa Porridge - and christmas ham on dark sweet bread. Yum! Manja graciously allowed me to take her picture, so you'd all get to see what a Swedish Lucia looks like. 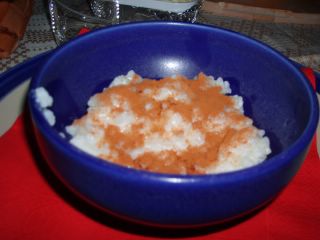 Santa Porridge with sugar and cinnamon, and soon to be added: milk.

Every school and daycare center has their own Lucia celebrations today. One girl is Lucia - usually a matter of voting for the prettiest girl, but some are a bit more forward and will simply have a lottery - and the rest of the girls are Lucia's Maids, "tärnor". These have glitter in their hair, and carry candles. The boys are either in Santa costumes, Gingerbread Men, or "Lucia's Star Boys" when they wear white dresses, and white pointy hats with stars on them. (I wish I did have a picture for you.) Everyone sings the traditional Lucia songs.

There's also national celebrations with a Lucia of the year, on TV and live at various locations. A Lucia concert is an absolute must for every Swede, every year. And as for what to eat - this is the day for the "Lussekatter", the yeasted saffron buns. They're a pain to make as they usually go stale in a day or two, but they taste great. (See some here at Dagmar's blog - she was good and made her own this year.)
Posted by Anne at 10:07

I guess I'll wish you a happy Santa Lucia Day, then, Anne. I have a Lucia wreath, complete with candles (though the leaves are artificial) somewhere in the back of my closet. I think my grandparents, who were swedish, gave it to me when I was a child.

Oh Anne, that is so lovely. Thanks for sharing!

What a nice story! Happy Santa Lucia Day to you Anne :)

Happy Saint Lucia day! I wish we celebrated it more in America. When I was in college my Swedish teacher would have all her students over for a Christmas party and there would always be a Lucia procession at the end.

...which reminded me that I didn't post the recipe :-)

Can you image that I havn't seen any Luciatåg today. No songs, nothing. I was busy all day preparing the appartment for the display that our estate agent held... But at least I had some glögg and ginger bread cookies this evening :-)

Oh Anne, thank you for posting this! Saint Lucia day is something I've always been curious about, especially because of the bread that's associated with it. I want to try making my own St. Lucia bread one day.