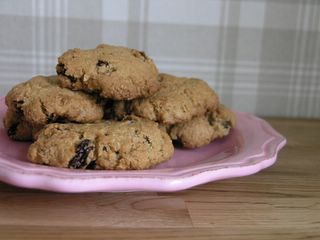 Do you like the TV-show Friends? I know I do. I followed it religiously when I was at university – Friends was the ultimate time to gather in someone’s living room, stock up on baked goodies and munch away while enjoying the comedy. I still like the show a lot. And several years ago, I got a cookbook called Cooking with Friends by Amy Lyles Wilson. It’s a pretty good book – if you’re a Friends fan. It combines quotes and pictures with recipes of things similar to what they eat on the show. And this recipe is one of my favorites. I’ve made it dozens of times, and everyone loves the result. Also, it’s one of the more memorable quotes.

"Phoebe: Okay. We haven’t known each other for that long a time. And there are three things you should know about me. One, my friends are the most important thing in my live. Two, I never lie. And three, I make the best oatmeal-raisin cookies in the world.

Rachel: Okay. Thanks, Pheebs. Why haven’t I tasted these before?

Phoebe: Well, I don’t make them a lot. Because I don’t think it’s fair to the other cookies."

Preheat the oven to 190°C (375°F). Cream the butter and sugars with an electric mixer until pale and fluffy. Add the egg and vanilla. Stir together oats, flour, salt, baking powder and baking soda, and add this to the batter, which will be very thick. Add the raisins. Drop the dough in heaped tablespoons on lined baking sheets, and leave plenty of room in between as they can spread a little. Bake for 12-15 minutes or until golden brown.

I don't see anything out of the ordinary in the list of ingredients. I've often wondered what it is that makes one recipe with primarily the same ingredients worthy of the word "best". Is it the varying amounts of each ingredient? Care to elaborate? I'm not being snooty, it's just something I don't understand.

Great episode of friends and nice recipe. I'm curious to see what other recipes are in that book...?

I love Friends and after reading your post I got an urge for baking theese cookies later today (but definately not an urge for Rachel's English Trifle... lol). Thanks for posting the recipe, Anne!

tnp - you'll have to ask Phoebe! :) Seriously - you're absolutely right. However, sometimes cookies are just better. Oatmeal-raisin is not a typical Swedish cookie by the way - in fact, we don't have the "american style" of soft, chewy cookies at all. Well, now we do, but ten years ago when I got the book? Not so much. So this was something quite new to me and my friends. I'm sure that I could just as easily have fallen for another recipe back then. :)

This seems to be a better idea for my oatmeal than porridge!

Hi Anne. I'm Liz from Malaysia. I'd tried this recipe last night and it turned out to be delicious! My family like it a lot. They said, these cookies are as good as the chocolate chips cookies I baked before. (By the way, I used your choc chip cookies recipe.) Just forget about "out of ordinary". Sometimes, ordinary things will surpise you.

I made these the other day for an annual event we do where we invite a bunch of neighbors over for a GrannFika.

They weren't remotely soft like yours seemed to be. For me, they were worryingly dry when assembling the ingredients. Hardly hanging together. BUT - in the end - they baked just fine and were delish! And THAT'S what COUNTS! :)