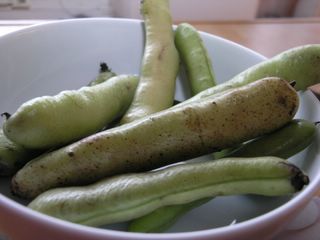 Faithful readers may remember that I don't eat beans. In general. The only beans I can stand are fava beans, and those are not generally easy to find around here. In fact, I make my parents bring me frozen ones from Spain. But, the other day when me and Per went back to Rosendals Gardens, I bought a bunch of fresh fava beans. I just thought I'd show you what they look like. The above picture is before any kind of shelling, and this one is after the first shelling. 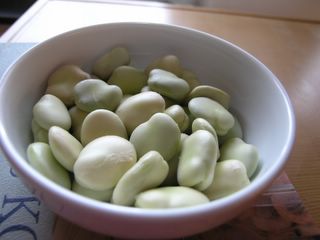 In retrospect, I should have left them at this. Instead, I removed the tough inner shell too, exposing the bright green kidney-shaped bean. And then I boiled them briefly in salted water. Sadly, some of them turned to mush. Next time, I think I'll leave them like this. Prettier, too.

Got a hankering for something to do with beans like this? I have two recipes I like a lot - Four Cheese Linguini with Fava beans and Gorgonzola Risotto with peas, mushrooms and fava beans. (Even though I did call them broad beans in that post. Same beans.)

I'll leave you for a while on this note - I'm going to Spain tomorrow, on our slightly-late honeymoon! I'll try to do a post for SHF tonight - custards, mmm! - but after that, my blogsitter Lena will take care of you. I have a couple of saved up posts that she'll make magically appear here, so I hope you won't miss me too much. (Ha, ha.) I'll be back soon, with (hopefully) wonderful stories of all the great Spanish food I'm planning on having!
Posted by Anne at 08:46

I hope you'll have a great honeymoon. Enjoy yourself!

And favabeans are delicious. I can usually find them frozen in a small arabic shop in Lund whenever I visit my mother. Fava and kidenybeans are the best beans ever. I could eat them all the time.

I live in Oman in the Middle east and in Arabic Fava beans are very popular. People eat them boiled and salted. SO often in small restaurants I see a sign that reads Foul and it took me quite a while to realise what the Foul referred to!!