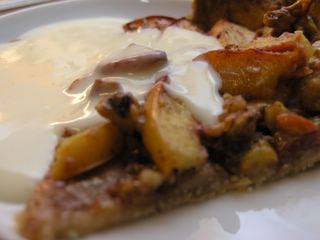 Elise from Simply Recipes is the host of this month's Sugar High Fridays. The theme - Cooking up Custard! Now, custard is something I think few bother about these days, at least in Sweden. You can buy it ready made, and you can buy it as a powder. Very simple. But, a home-cooked custard is better, for sure. I opted for a simple version - thickened partly with an egg yolk but helped by potato flour. Thus minimizing the risks of splitting. It tasted heavenly.

To go with it, I decided to use up a couple of nectarines that were laying around, and I improvised a little tart. I also got an occasion to try out a sweet pastry recipe, apparently from Chez Panisse. Not sure where I got it to tell you the truth - I think it was posted in someone's comments. I just clipped it out and saved it. It was fine - but maybe not as entirely foolproof as I would have thought. Anything that involves rolling out pastry - well, it's bound to fail if you're not practised. And personally, I don't like tart pastry much. Or pie dough, for that matter. I do like the fillings though, so I still make pies from time to time. This one was nice - the filling is very good with different textures and bright flavors, and Per loved the pastry. (We're a good match that way.) 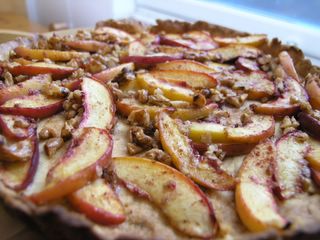 Mix the egg yolk, milk, sugar and potato flour together in a small saucepan. Heat gently. Whisk constantly, until the sauce thickens. It must not boil. Remove from heat, keep whisking, and add the vanilla sugar. Let cool or serve while still lukewarm.

Beat butter and sugar together until creamy. Add salt, vanilla, and egg yolk and mix until completely combined. Add flour and mix. Wrap ball of dough in plastic and form a flat disk. Chill until firm. Then roll out, line a tart form, and put in the freezer for fifteen minutes. Directly from the freezer, bake blind in a 175 degree (350F) oven for ten minutes. Fill, and bake until finished.

Combine, and add to the pre-baked tart shell. Bake until golden and it looks "done" - mine took about 15 minutes. 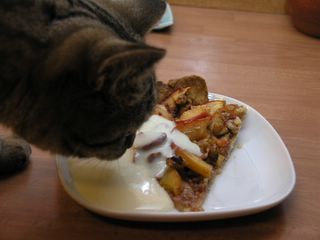 AH! Your cat looks like he's gonna pounce on that! I wish I could right now. Thanks for that custard recipe, I'm always wishing I had it lying around the apartment...it's good with so many things!

Tart doughs I can take or leave, but a good pie crust is a wonderful thing.
Nectarines, on the other hand, are something I can't say no to. Looks great, Anne.

The dessert looks fantastic, and it looks like the kitty is pretty happy with the results too!

Great looking tart! Thanks for sharing the pictures!