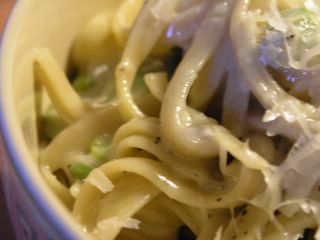 I spent all afternoon yesterday shopping with a friend, and when I returned home, I was exhausted. And lonely, since Per was off on a business trip. What better thing to comfort me than... cheese. Cheesy pasta, to be exakt. I had found a recipe in a recent issue of "Mat och Vänner", a fairly pretentious foodie magazine that's been around for about a year, and I was itching to try it.

Luckily, on our shopping trip, we stopped by Hötorgshallen, which is the Swedish version of Les Halles. That's a good stop if you need cheese. And I need four kinds - Fontina, Pecorino, Gorgonzola and Parmesan. Parmesan is always in my fridge, Gorgonzola can be found in any store. Pecorino proved a bit harder, but the cheese-man had four kinds to choose from. Fontina on the other hand - the first cheese-man said it was impossible to find. Defeated, I turned around and walked smack into another cheese-seller, who had a big block of Fontina in the glass case. So, I bought some of that, too.

At home, I promptly put on a pot of water with plenty of salt, and started boiling my wholewheat linguini which is not only fairly healthy, it has an amazing nutty flavor and a great texture. I defrosted my fava beans (as I have written before, this is pretty much the one kind of bean I like. And I can't buy it here - I have my parents bring me back frozen bags of it from Spain. Ridiculous, really.) and shelled them. (I normally eat the shell too, since these are tiny little baby beans, but for this I wanted the purer bright green bean, and not the slightly tough shell.) In a small saucepan, I melted the butter, added the fontina and gorgonzola, added the pecorino and parmesan... and when the pasta was cooked, I tossed it with the cheese sauce, a little bit of pasta water, the beans, and some freshly ground pepper. I finished with a final grating of parmesan on top.

Bliss. I did have a problem getting the cheeses really emulsified, and instead of lusciously coating my pasta, they clumped up a bit. Not a problem, because more delicious clumps? I could not imagine. It was my first time with pecorino, and the salted sweet milkiness blew me away. Fontina, I could do without though. The recipe said to substitute mozzarella if need be, and I think that's what I'll do next time. Or just skip it, and up the gorgonzola instead.

linguini for two people (I suck at measuring pasta - just use however much you normally would. Use whole-wheat linguini if you can find it - it's great!)
25 g butter
50 g pecorino
50 g gorgonzola
50 g fontina
50 g parmesan plus a bit extra
freshly ground black pepper
handful of fava beans, shelled

Boil the pasta in plenty of salty water. When al dente, drain and reserve the water. Melt the butter, add the cheese - start with fontina and gorgonzola, and add the pecorino and parmesan last. Boil your fava beans for a few minutes, until "just right". (I used the microwave.) Toss the pasta with the cheese, add pasta water if you need more liquid. Toss in the beans, and the black pepper. Finish with a final grating of parmesan.
Posted by Anne at 10:52

This sounds so yummy and comforting. Thanks for sharing.