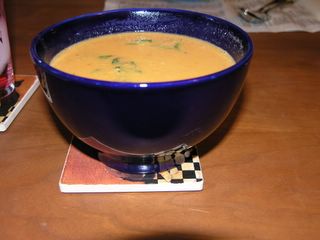 I don't have that much to report - this week has been very low food-wise. I've been really busy, and haven't really had time to cook anything exciting. And I'm leaving for another weekend conference tomorrow morning. Oh well.

On Monday, I made a really nice stew that has been serving me well as lunch for this week. It's cold and snowy outside, and stew is the way to go. It's very basic - chunks of meat, onions, garlic, tomatoes, carrots, spices, and I usually would add potatoes, but this time I opted for the package of risoni that sat in the back of my cupboard instead. It turned out very well, and the risoni soaked up a lot of liquid turning the whole thing from a soup into a proper stew. Of course, as with most good stews, it took a good three hours to cook.

I have one notable exception this week, and it was a rather good tomato soup that I made from Jamie's Dinners. It used up all of my over-ripe plum tomatoes (about 800 g), and had carrot, onions, stock and spices in it. Near the end, when the tomatoes (peeled!) had been properly cooked for about half an hour, you bashed them with an immersion blender (or a regular blender) and this is when my accident occurred. In many soup recipes, the writers take care to point out that the liquid is very hot; so don't burn yourself. Right. There's a very good reason for the warning. In this case, I was dumb enough to rest my handheld blender in the pot, standing upright as it is fairly sturdy. I then attempted to grind some chili into the pot, clumsily knocking over the blender, and ending up splashing hot soup on my hands and wrists. Ouch, ouch, ouch! Pain!

Being hungry, I rinsed my wrists for a couple of minutes with cold water, finished the soup with a mixture of egg yolks, balsamic vinegar and light cream, and sat down to eat. I whined all night, but the soup was tasty. (Will post picture later.)
Posted by Anne at 10:15

Ouch! You have my sympathy. I burned myself testing whether the propane tourch used for making creme brulee had cooled enough to be put away.

Keep on creating good tasting food, be it simple or elaborate. It's the act of creating, sharing , and enjoying that counts.

Thanks Rick, I'm happy to hear it's not just me :) Torches are a bit scary - I got one for christmas, but have only used it once with semi-good results. Will have to experiment more though, but mine kept setting the sugar on fire. Not exactly what I was after!