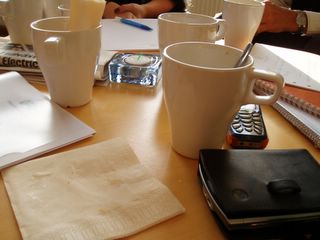 I was at a work conference Friday and Saturday. As I didn’t cook, I thought I’d write a few notes on the food. The conference was held at Skogshem & Wijk, which is actually two different places. I’ve been to Skogshem before, but this one was held at Wijk. On their webpage, it’s said that the two chefs compete, resulting in fantastic food at both facilities. Well. I’d have to say that Skogshem is definitely the winner, then. Because this food sure was no prize. It wasn’t awful – but Skogshem was a lot better.

Dinner on Friday night started with a very classic Swedish appetizer, toast Skagen. This is, as the name implies, a toast topped with Skagen-salad, which is a creamy mix of mayonnaise and shrimp, flavoured with dill and lemon. It can be extremely dull. This one, however, was quite nice. The bread, a small triangle, was toasted in butter and had a very satisfying crunch, and the Skagen-salad was creamy and flavourful. All well thus far.

For the main course, they served tornedou – a thick fillet of beef, grilled. Grilled to death, I might add. It had no pink whatsoever, and was very tough. This came with a baked potato, or rather half a giant baked potatoes. No complaints about that one, except the sheer size of it. For veggies, there was a spoonful of roasted beets, wonderfully moist and flavourful – but way too little. And there was some kind of orange sauce – not tasting very much of anything, just providing some inadequate moisture for the dry meat. 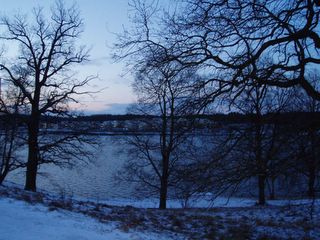 Here's a picture from my morning walk.

Dessert – oh, they had a buffet. That is pretty cool. I sampled – large samples, I must admit – tiramisu (sucked – it was made with sponge cake rather than with biscuits, and was dry, dry, dry), chocolate mousse (heavenly – but weirdly served on a sponge base. Which I didn’t eat.), banoffie pie (very excited as I have never had this before. Good, but the pie crust was rather nasty – dry. I ate the filling, happily) and two cookies. One was a chocolate chip biscotti, and while it was fine, I wish they had served coffee with it! The other was a peanut cookie, and that was great. It was very tender, and tasted very much of peanuts. Yum.

Breakfast buffet was good, very nice homemade bread and a good assortment of spreads, fruits and other nice stuff. We were also served very yummy fresh cinnamon buns for coffee at 10, and those were awesome. Notice them missing in the picture on top. For lunch, I wasn’t very hungry and that was just as well. The options were a sad-looking lasagne, an oven-baked white fish covered with tomato slices, and a vegetarian paella. That is, saffron rice with peas. Um, no thanks. I had the fish, which was boring (dry! What *is* it with this kitchen and dryness?) but served with a delicious sauce.
Posted by Anne at 14:47

Dear anne, after my visits to Stockholm I was looking for the receipe of skagen mix wich I liked a lot and I found you talking about it. Your site is really nice and I intend to tour in it.
I really ate very nice in Sweden.
Stella from Athens Greece

Anne,
in 1988 we hosted a Swedish exchange student for a year, and he is like another son in our family. We first visited Sweden in 1996, again in 2005, and again last summer. Your photo made me want to get out my suitcase again. Your country is beautiful, and every bite we ate was wonderful. I also love to cook and am making skagen for our supper because it's quite warm here today. We will it it on the porch, overlooking our backyard garden. I look forward to visiting both your site and your country again.
Nancy in Bethlehem, PA - USA