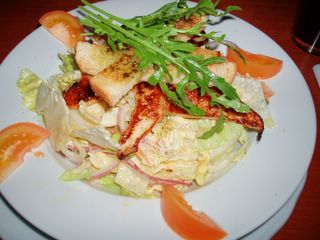 Here's a nice Ceasar Salad I had last week at Småstad, a nice little restaurant near my friends Lena and Nico. Everything on the menu sounded good - and this was confirmed by my friends as they had eaten pretty much everything on it. Per went for a burger that was served with a chili-aioli, and both Lena and Nico had pasta. Everyone ended up happy, and very, very full.

I've been to another conference from Friday to Sunday. Nothing spectacular foodwise (and that's putting it nicely) - most notable exception was a chocolate truffle served instead of dessert on Saturday night. It had a subtle banana flavor, and was really nice with coffee. Other than that, the food was pretty much what you can expect when there's a thousand people to serve.
Posted by Anne at 06:35