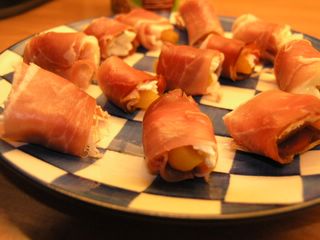 My mom called earlier this week, and asked if we couldn't get together for a little pre-New Year's eve dinner, tonight. I thought that was a great idea, and started planning. Now, I am so incredibly full. Way, way too much food! But it was SO good.

The ham rolls are from Nigella's latest book, Feast. She makes them with Parma Ham, and figs instead of the dried apricots. I rather use plump, juicy apricots, and a cured ham that has a bit more taste than the Parma that can usually be found here. Tonight, I used a German kind - very good, and slightly smokey. You don't want the see-through thin slices here - thin, but not quite that thin. Just make narrow strips (halve the slices length-wise) and roll around half an apricot and a smear of good, ripe goat's cheese.

For the entree, I used my trusty Nordica Grill. Must say, I love this little appliance! It's very handy - not only is it great for grilling meat, it's also perfect for sandwiches. We had a dedicated sandwich maker before, but this is much better. Tonight, we had fillet of beef, really good, high-grade meat from Brazil. I sliced it thickly, seasoned with plenty of salt and pepper (mixture of black, white and pink) and grilled for about two minutes. Perfection. Sure, you don't get quite the same surface that you can get from a very hot pan and plenty of butter, but you get a very pure meaty flavor, and a lovely pink, oozy interior. (And no added fat!)

The beetroot was really interesting, and very good. I sliced six small beetroots thinly on my mandolin, and poached the slices in a mixture of balsamic vinegar (about 150 ml), honey (about three tablespoons) and a little bit of water. When the slices were cooked through, I lifted them out with a slotted spoon, added some salt, and let the solution reduce until about half remained. I added the slices back into the pan, added a few knobs of butter, and some chopped coriander. Yum!

My potato au gratin is the best I've had, and I have to share a proper recipe for it. It's very easy to make, and so worth it. It creates a creamy garlicky sauce, so you never really need to serve anything but a slice of meat and a salad with it.

Warm the oven to 225 degrees centigrade. (450 F, I believe.) Saute the leek and the garlic in the olive oil in a large pan. Add the milk and the cream, and a lot of salt. It should taste overly salty, as the potatoes will soak up most of it anyway. (I always need to add salt, I'm too wussy to add enough.) When it comes to the boiling point, add the potato slices, and let them boil slowly for about 10-15 minutes. They should become fairly soft (but certainly not mush!!) and most importantly, they need to release their starch. The liquid will become thick and creamy. When it does, tip into an oven-proof dish, and cook in the oven for about half an hour. Watch it though - it may start to get too brown on top, and needs to be covered with foil.

The brulee gets an entry of its own. Not that it was great, but.. interesting. Huh. I need to practise a lot more.
Posted by Anne at 20:47