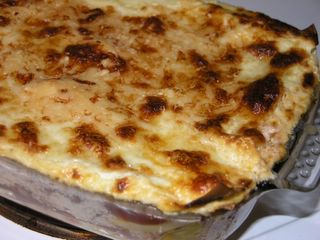 First meal of the year for me was a lasagna. I felt like cooking from a recipe rather than from my own jumbled thoughts (I have a cold - I've had a slight fever for a week now, and am rather dizzy) so I decided to try the lasagna from Jamie Oliver's latest cookbook, Jamie's Dinners. What I ended up doing wasn't exactly the same as his - he suggested a layer of Butternut Squash, I substituted with button mushrooms instead - but I ended up with the best lasagna I've had. I also augmented some quantities, and generally made some changes.

Here's what I did:

Preheat the oven to 180 degrees C (350 F). Fry the bacon with the cinnamon. (This smells incredible!) Add the garlic, onions, carrots and the olive oil. Blend well. Add the herbs. Add the meat, fry for a couple of minutes, and add the tomatoes and the wine. Bring to a boil, cover with wet greaseproof paper and a lid, and place in the preheated oven for two hours. (Yes, you read that right.) You can also cook it on the stove of course, at a low heat, for about the same length of time. This makes more sauce than you need - perfect since I needed a couple of lunches for next week. I just boiled some pasta to go with it.

Fry the mushrooms in the oil, add the thyme. Simple as that.

Assemble the lasagna by first lightly greasing a casserole dish with some olive oil, and then add the first layer of lasagna sheets. Add a layer of meat sauce, then white sauce, and then another layer of sheets. I then added the mushrooms, and covered in white sauce. Lasagna sheets, and repeat with one more layer of meat sauce and white sauce. Finish with a final layer of lasagna sheets, and cover it with the rest of the white sauce. Tear up the mozzarella and place on top, and add the rest of the grated parmesan. Cook in 200 degrees C (400 F) for about half an hour, watching closely so the top doesn't burn.
Posted by Anne at 13:04

Sounds like a really nice lasagna. I hope new year's was nice too. If you want to, please check out my blog (started when I got your e-mail). It's swedish.

This sounds like a good lasagna. I make a lasagna blognese with bechamel sauce. I don't currently have it posted on my blog but plan to get it on there soon, if you are interested. I do have other recipes on it.

May I know what size of casserike dish you used for your lasagne?

I love your website It's so original and thanks for putting up the lasagna recipe. I really appreciate it.

Great idea to a bit of what Jamie says and then do some of your own thing as well. For me, I'm going to do mostly what you say and then put a bit of myself in at some point too......let you know what that was and how it went next year. Happy new year! By the way, Jamie's chille is fantastic too....pureed sun dried tomatoes to thicken...lovely

I have been making this lasagna for a year now( the original with the squash and coriander and pepper layer too.. it is the best freakin lasagna ever.. it takes forever to make and worth every minute of it.. in my circles, i cannot go to a dinner party without this in hand. but i lost the recipe and did a google search and you popped up. thank god. i am craving it and need to make it... totaly carb hibernation mode. thank you.

I used to have that cookbook... and one little but essential ingredient you forgot is a little bit of nutmeg in the cream sauce - it adds a subtle but very special flavour. (or that is my opinion at least...) Thank you so much for putting the recipe up though, I was desperately searching for the cream sauce part of the recipe as I always get confused between crème fraiche and fromage frais and couldn't for the life of me remember which was in the recipe!
Myra B.

Hey I made this too but with the anchovies and the b sq. Used all beef mince tho. It was absolutely yummy :) great to meet a fellow enthusiast!

love your amazing lasagna but you surely dont mean a tablespoon of salt? Do you mean a teaspoon not sure of the measurement.

Anonymous - yep, one tablespoon. If you're worried, just use less. It'll be fine!

The anchovies you can use instead are very salty - but the meat sauce isn't salty at all, and the pasta soaks up a lot of flavor.

The Lasagna really is absolutely amazing! Thanks :-)

Amazing is the right world! It's delicious! Thanks Anne!

This was one of the best lasagnas I've eaten. I couldn't find my copy of Jamie's book you mentioned, so I was pleased when I found this. When I was placing my dish into the oven however, my sister told me where my book was.

I fried the button mushrooms in a squashed garlic clove very gently until they browned, they were beautiful, I nearly ate them all before adding them to the recipe. :)

This recipe was delish, many thanks.

Do you cook the white sauce ingredients before layering them between the meat and pasta, or only mix them together?

The white sauce is just stirred together, not cooked.

I discovered this recipe almost 2 years ago when google searching for a good lasagna recipe.

This is now THE reference lasagna recipe! Love it! Thank you Anne. You're my favourite blogs too!

This is it, we are having it tomorrow :)

Unbelievable! The best lasagna I have ever had. Thanks so much for the recipe!

This is by far the best lasagna I've ever tasted. It is simply scrummy. Thanks Anne so much for sharing it with people across the water.