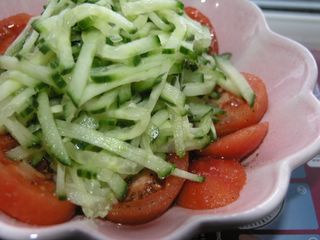 I woke up late, and decided to skip breakfast since I'm just lounging around today anyway. However, I did want lunch. I really wanted pasta in creamy cheese sauce, preferrably with some leftover christmas ham, but I also had a yearning to play with my new mandolin, and my new cutting block. And there's just not that much cooking involved making pasta, so I decided to go with a small salad, too.

It's not much of a recipe. I had three overripe tomatoes that really needed using up. I dipped them in boiling water and peeled off their already wrinkled skins, because overripe tomato skin is just gross. I sliced them, placed in a bowl, and seasoned with freshly ground pepper. (White, black and pink, as it happens.) Some salt, too. I drizzled over some black currant balsamic vinegar, a lovely fruity slightly sweet vinegar that I picked up before christmas.

Next, time for the mandolin to play. I cut cucumber in tiny batons - julienne! - and seasoned with a spoonful of sugar and a little bit of salt. I placed this on top of the tomatoes... and well, that was it.

The pasta? I ate that before I had the time to take a picture. It wasn't very pretty, but it was good.
Posted by Anne at 13:45