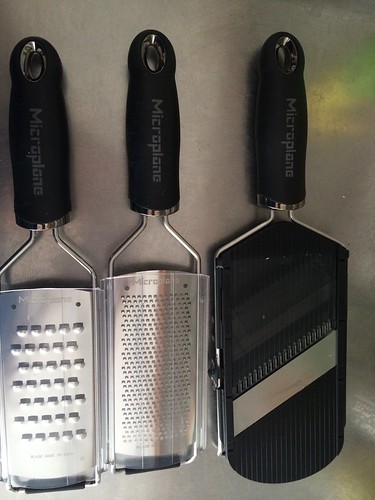 Microplane has sent me some goodies - really awesome, sharp goodies. I've been using their graters for years, and while I love them and use them often, I was dismayed when two of mine decided to break at virtually the same time! Both had plastic framing and that's what broke - not too surprisingly after hard use, but still, disappointing. These ones, however, are part of the Gourmet series and there's no plastic, meaning there's really nothing that can break.

I use the fine one for garlic, ginger, chocolate, and citrus zest, mostly. The large one is great for cheese, although I also have an older ribbon grater that's pretty nice. The large one can also do things like carrots, cucumber (perfect for tzatziki) and many other things.

The third thing in the photo is Microplane's new mandolin slicer! It's nice and sturdy but it's main feature is that it has a removable julienne blade. Basically it's a small extra attachment, that makes perfect long ribbons of food. While not in use, there's a storage place for it in the back of the slicer - very handy.

I don't think I need to tell you that all of these are super sharp and should be handled with care. Nothing for the kids! :-)
Posted by Anne at 11:03