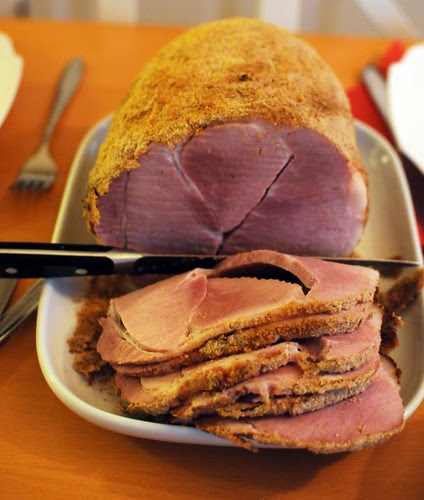 Swedish christmas ham is an absolute must on every christmas table. I know families that go through two or three hams during a holiday season, since they eat it sliced on sandwiches every morning - with lots of Swedish strong-sweet mustard. Me, I'm not a huge fan, but I do like a slice or two. (But hold the mustard.)

My ham this year isn't done yet - it's an old photo - but it's from Scan (a christmas gift - thanks!) and it's from a canola-fed pig, rapsgris. I've had those before and they're awesome. I have very high hopes for this one, too.

The mustard you use by the way - it's special. It's certainly nothing like the yellow American stuff, or dijon for that matter. It's strong, it's spicy, it's sweet, and it's pretty grainy. It has a lot of vinegar, and a lot of sugar, too. I have no idea where to get it outside of Sweden - IKEA, I presume?

So. Get a ham. Either a pre-boiled one, as most seem to do these days (I know I certainly did) or a salted one that you boil or bake yourself. Cut off any visible fat. Or don't. Preheat oven to 225°C. Take three tablespoons of hot, sweet grainy mustard, and one egg. Beat vigorously together until you have a uniform, silky mixture. Brush this over the top of the ham. Sprinkle over breadcrumbs - loads and loads of breadcrumbs - and press them into the mustard.

Bake in the oven for fifteen minutes, watch closely so it doesn't burn.

That's it! Eat cold, in thin slices. Will keep well in the fridge for quite a while, wrapped in foil.
Posted by Anne at 15:16

This is the type of mustard you are probably mentioning:

Thanks Mike! That looks close enough. Ours is a little darker, but I'm sure the taste is similar.

My Swedish bride has her own recipe, handed down from earlier generations, for "barbed wire" as we call this mustard. I know that dry mustard (obviously!) is one of the ingredients and also some Akvavit (since a little always goes missing from my bottle about this time of year--and she doesn't care for it--at least that's what she tells me...) but if I can get her to reveal the rest of the secret I'll share it.