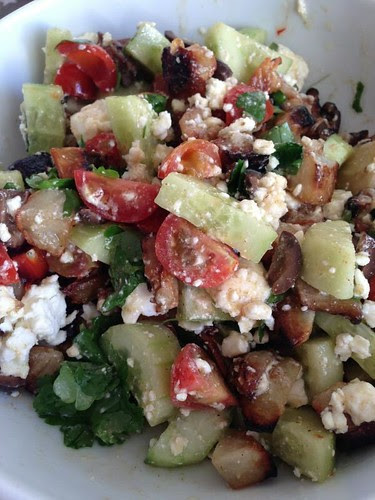 I had a bag of sunchokes  or Jerusalem artichokes, as they're also called, in my fridge for three weeks before I finally found the energy to cook with them. I know many use them in soups or purées but I usually find that a little too intense, a little too one-note for my liking. Then, as I was reading one of my (countless) new cookbooks, Street Food by Susan Feniger, I came upon a salad using roasted Jerusalem Artichokes. It's not exactly this, because her's is really a fattoush with toasted olive bread, but I used the elements I wanted. And it turned out brilliantly. So good! We ate this with some grilled pork, but it'd be a good dish on its own or with almost any protein.


Heat the olive oil in a frying pan. Peel and cut the artichokes into small pieces. Fry them on fairly high heat until golden all over (but be careful not to let them burn, of course.)

In a large bowl, mix the citrus juices with a good dash of cumin, a little sambal oelek or other chili paste, and the parsley. Toss with the tomatoes, cucumber, feta and the fried artichokes.
Posted by Anne at 20:54

Looks very yummy, I love the colors, and you made me laugh since I also have in my fridge the same artichokes and I had no clue how to cook them!
Thank you!