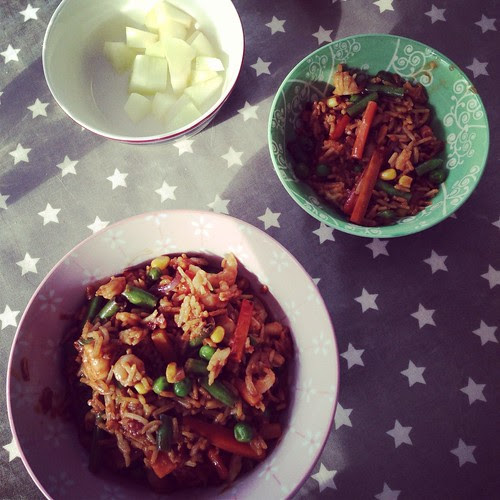 I haven't written about Dante's food habits yet (I wrote this blog post about Titus though), but really, there hasn't been much to write so far.  He's mostly been nursing, but trying our food for the past few months. We don't give purées or baby cereal, and since it takes a little longer to learn how to eat chunky food,  he's taken his time. Now, however, it's become much easier. He doesn't eat baby food, he eats whatever we eat. The only problem with that is I can't very well just eat a sandwich for lunch, unless I have something else for him - sandwiches aren't all that easy to eat with seven tiny teeth.

We're not doing any kind of super-strict baby-led weaning, in the sense of letting him feed himself. He seems to prefer spoon feeding, or simply having pieces placed in his mouth. (He got so excited when he tried melon that he bit me, quite hard, when I wasn't fast enough.) And I suppose that's baby-led too - he clearly shows us what he wants.

And boy, did he want this! For good reason, it was really tasty and very flavorful. Now, beware, some will think this is too salty to give your baby - both bacon, soy and shrimp are a little salty. However, mine is still on tiny, tiny portions and I really don't worry much about that. Use your own judgement.

Obviously, adjust as you see fit, I worked with whatever leftovers I happened to have in my fridge and freezer!

Start by frying the bacon until it's starting to brown. Add the peanut oil and the carrot strips, and fry on medium heat for a few minutes. Add the aromatics - garlic, ginger and onion, and stir for about a minute. At this time, crumble the rice into the pan, and stir well. Fry for a few minutes, and then add the peas, corn and green beans. Let it cook for a minute, so that the frozen veggies thaw, then add the coconut milk. Season with a little bit of soy sauce. Finally add the shrimp. If uncooked, heat until pink and opaque, and if frozen, heat until they're warmed through.
Posted by Anne at 19:14