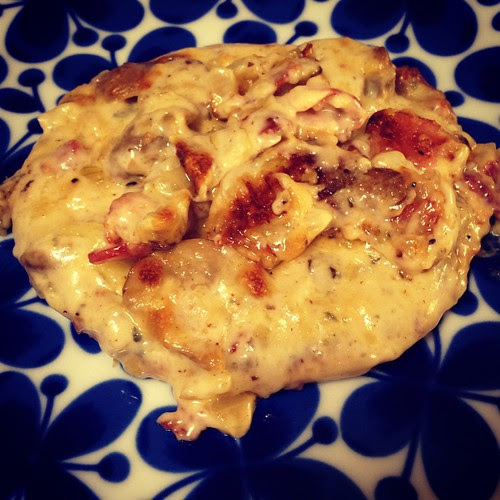 This dish screams early 80:s to me, but despite that... I had a huge craving for it. I thought I'd blog about it, too. It's not sophisticated in the least, but it's satisfying. Very. (And besides, if I had that kind of requirement for blogging, I think a majority of my posts would be disqualified.)

You can add whatever you like to it of course - leeks and ham would be nice, maybe some corn? If you don't like blue cheese, just leave it out, and feel free to add some grated cheddar on top instead.

6 rounds of sandwich bread, like Rågkakor or Vetekakor - slightly sweet, soft bread. (about 15 cm diameter, not that it matters much)

Chop the bacon into small pieces, and dice the onion. In a frying pan, fry the bacon until crisp, then add the mushrooms. Meanwhile, in a saucepan, melt the butter and gently fry the onion on medium heat for about five minutes. Sprinkle in the flour and stir really well, then gradually add the milk, whisking well to make sure it doesn't clump. When all the milk is added, add the cream as well, turn up the heat and bring to a boil. Stir all the time. When boiling, lower the heat and simmer for a few minutes. It should be pretty thick, to properly stay on the bread. Stir in the bacon and mushrooms. Crumble in the blue cheese, stir until melted and then divide onto the bread.

Gratinate at 200°C for ten minutes until golden and bubbling. Serve right away, with (or without, I won't tell on you) a salad.
Posted by Anne at 18:01

Seems like great comfort food on a cold Winter day here in the Nordic region :-)

Seems like great comfort food on a cold Winter day here in the Nordic region.