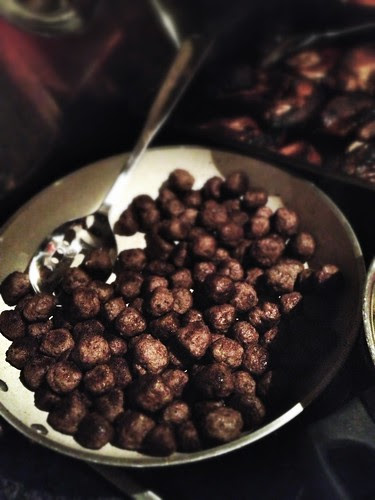 I tried a different meatball recipe this time. I've had to make lots and lots of meatballs, for two celebrations already, and this recipe was really quite nice. It doesn't contain actual onion, which can make the balls uneven, but instead onion powder. Sounds weird, but give it a try!

Also, I oven-bake these, and then re-heat in a saucepan with butter just before serving to give them a nicely seared surface and more flavor.

Swedish meatballs are always traditional on the christmas table, and they're served as they are, not with any sauces or gravy. People typically eat them with potatoes, or Janssons Temptation, and beetroot salad (which I also have a great recipe for - watch out in the next few days.)

And as a side note, they're NEVER EVER served with cream gravy and noodles. Never. Possibly with gravy and potatoes (but not when part of a smorgasbord), or with noodles and ketchup - but never in that combination.

Mix the cream, milk, breadcrumbs, egg, and all the spices. Let it sit for ten minutes. Add the mince, and mix well. Place in the fridge for half an hour.

Roll small, even balls - they'll shrink a little bit in the oven, but aim for something slightly bigger than a hazelnut.

Bake in the oven at 175° for about 10 minutes. Then chill, and freeze if you're not serving them within the next day or so.

When serving, re-heat in a pan with butter on medium heat until hot, fragrant and delicious!
Posted by Anne at 09:00

Hej Anne! What kind of breadcrumbs do you use? The meatball noodle thing is a weird Americanized bastardization of Swedish meatballs. I have no idea where it comes from, but there are even frozen dinners that claim to be "Swedish meatballs with gravy and noodles." Thanks for another great year of blogging and God Jul. Patrice

Hi! I use regular breadcrumbs, the kind I can buy in a box. :-) It doesn't matter much here, it's just a binding agent anyway. And I really wonder where the idea of gravy & noodles came from - it always surprises me so much. (I get a lot of questions about it too, like "but how do you make your gravy if you cook them in the oven?")

Hi Anne! Thank you for sharing your recipe for meatballs. I'm gonna try your recipe this coming holidays. I'm a filipino and want to try some new recipe - Swedish meatballs, excited. I hope that you will also try to visit my blog filipino food . Thanks a lot