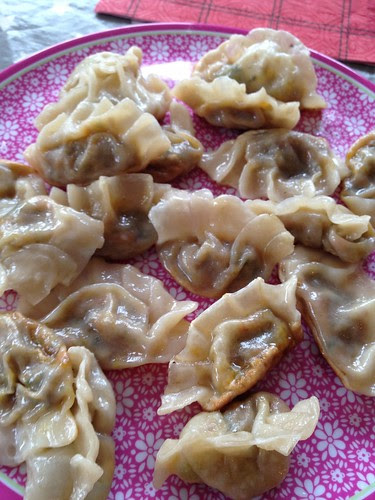 I've made dumplings at home a few times now. My friend Jenny had asked me to show her how to make them, and as she's a vegetarian,  this was the first time to try out a veggie filling! My friend Christina joined us too, for a fun day in the kitchen. Dumplings are pretty labor intensive, so it definitely helps to have some extra hands around. Especially when you have a somewhat whiny baby, with chickenpox, to console at the same time...

(And for that same reason, please excuse the awful  iPhone photo..)

I improvised the filling, but it went something like this:

First, put the leek, the mushrooms and the cabbage in a food processor and blitz until finely chopped. Heat the peanut oil in a saucepan, and fry the veggies - add the grated carrot as well, until softened. Ideally try to drain out excess fluid at this part - we didn't and our filling was quite wet.

Place the softened veggies in bowl, and add your aromatics - ginger, soy, sesame oil, sambal oelek (or finely chopped chili), and coriander. Add the corn starch as well, and season with a little salt and pepper.

They look absolutely perfect! I've never tried making my own dumpling skins before, I am totally impressed.

God, just made my day. Will need to make this with pork and cabbage... thinking Gyoza here.

Looks very yummy, I prefer the vegetairan version than the meat version so this is awesome!

I love the vegetarian version of potstickers, and you can vary so well!

BTW, I just spent 2 weeks in China (some pictures are on my blog) and had some authentic ones there, some are also vegetarian. Spinach as a filling is good, too. And mushrooms.