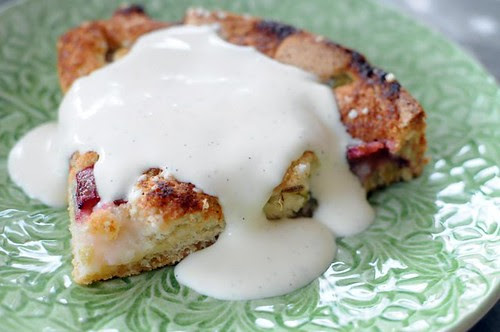 In Sweden, we have a product called "Vanilla Whip" (Well, it's really called "vaniljvisp") an it's basically a vanilla sauce that you beat a little and serve fluffy. It has a pretty awful ingredient list (this is one of the brands, but they're rather similar):

Really. That's just not ok. My version, which is called råkräm, has a total of four ingredients:

And what you do is this: Beat the yolks with the powdered sugar and the scrapings from vanilla bean until it becomes a little airy. (Not so easy with such a small batch, but do your best.) Lightly beat the cream into a billowing cloud. Stir in the vanilla mixture. Serve. For example, over this rhubarb cake.

Bonus: it's a million times better than the pre-packaged stuff. However, I realize that it's not safe to eat raw eggs in some parts of the world. Swedish eggs do not have salmonella, so I'm not at all concerned. If you are, sorry, you'd have to make something else then.

wow, that is so interesting about the eggs in sweden.

swedish corporate services said...
This comment has been removed by a blog administrator.
August 10, 2012 1:00 PM