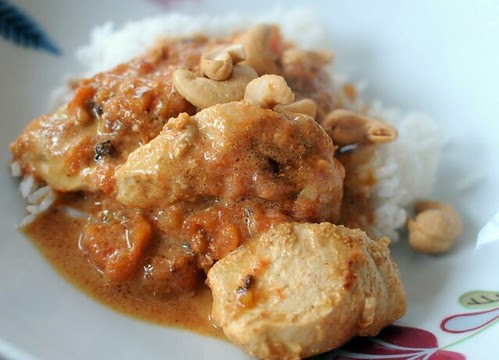 There's a small restaurant near my gym. They have various Indian dishes, but by no means a full menu - and some sushi. I've always had the same thing - Butter Chicken Tikka Masala. It's just tender chicken in a smooth, mild, red sauce, with rice and maybe some toasted cashews on top. Tasty, simple.

And not that hard to make at home. I used a recipe from "50 great curries of India", and while I'm not entirely happy with it, it's good enough to blog about. A word of warning though - this is a very mild dish. If you want more spice, by all means, add it.

Also note that my measurements differ a little from the original - as usual, I can't help tinker a little with the recipes I use. (The original had even less spice, by the way. )  I also left out fenugreek - didn't have it.

Please note that you have to start well in advance, to drain the yogurt.

On the night before you plan to cook this, drain the yogurt. I simply put it in a coffee filter and let it drip off any excess liquid (lots!) overnight.

In the morning, mince the garlic and grate the ginger. Mix this into the yogurt along with chili, coriander, cumin, garam masala, salt and lime juice.

Cut the chicken into large pieces and toss with the yogurt marinade. Cover with plastic, and refrigerate for at least a few hours.

Also, prepare the tomatoes in advance - you want to blanch them and peel them. Easiest way is to cut a small cross into each, and drop them into boiling water. After about a minute, move them to a bowl of cold water, and when they're cold enough to handle, simply slip off the skins. Mash the tomatoes with a  potato ricer, or a fork. (Or just use a blender, I'm sure that's easier.)

When ready to cook, cook the chicken in the oil, on medium heat. Meanwhile, cook some rice, and bake some Naan if you feel ambitious. (I did!)

For the sauce, cook the tomatoes on medium heat for about five minutes. Add the butter and the spices. When the butter has melted, add the cream, and season with salt and more spices if you'd like. Immediately pour over the chicken and serve.

The book warns you not to make the sauce in advance - it's meant to be served right away. Otherwise, I suspect the butter might cause it to split.

hey this looks AMAZING!! wanna try it sometime if I can get myself garam masala here.

I like butter chicken a lot but always very hestitate to make it since Indian food always require so many steps and ingredients. What's your recommendation for a starter?

Phil - once you gather all the spices, it's really so easy. But I agree, the ingredient lists are a bit daunting. For a starter, I really like Indian Popadums (kind of cracker-like, made from chickpea flour) with mango chutney.

I love that book, but I have to say she always adds too much water. I haven't tried this one though.