A new ice cream machine, and a new method! 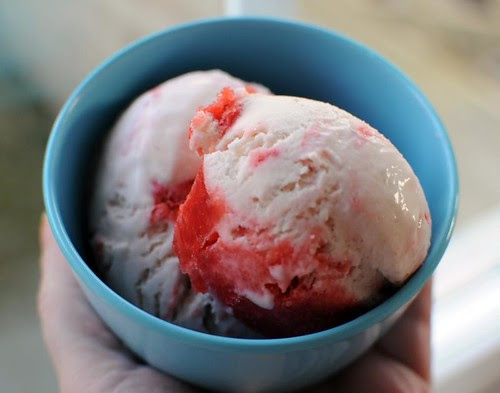 I love making ice cream - at least in theory. I've had an ice cream machine since I was about 8 - and I still have that same one, an old Philips. It still works, but lately it's occurred to me that maybe it's not as good as it once was. It doesn't freeze the ice cream very solidly, and the freezing disc itself is looking a bit wonky. I started looking around for new machines, and realized that the Kitchen-Aid ice cream attachment had gotten pretty good reviews. I asked for more input on Twitter, and would you believe that one of my followers, @helenagullberg, quickly replied that she had one, she wasn't using it, and I was more than welcome to borrow it for a while. Really, the kindness of people!

So, on a sunny Sunday afternoon, we visited with Helena and her husband in their beautiful home, admired their vegetable patch and their greenhouse, and were entrusted with the Kitchen-Aid attachment. I was pretty excited to get home and put the bowl in the freezer, where it stayed for two weeks until I could make up my mind on what to try.

My first recipe was from Jeni's Splendid Ice Creams, a book that I really, really enjoy. I've tried three recipes so far - first a Honeyed Peanut Butter Ice Cream with dark chocolate freckles (or streaks, as it happens) that I made with the old machine. Great in texture, but too sweet for my liking, and too much honey flavor. Next, Roasted Strawberry & Buttermilk, which was also the first one to try in the Kitchen-Aid. Roasting the strawberries was a great idea to make them more intense, but adding buttermilk (or filmjölk, as I did) isn't something I'll repeat, it was too tangy for me. I layered the finished ice cream with more strawberry purée (as the recipe yielded extra) and it was delicious! A little hard once frozen in the freezer, but I'm blaming the added liquid from the purée. My third flavor was Creamy Lemon Ice Cream and that turned out brilliantly!

If you're not familiar with Jeni's ice creams, they're pretty un-traditional. Instead of using eggs, she has a special recipe that involves cream cheese, and corn starch. Sounds weird, but the reasoning behind it is very sound, and more importantly, both flavor and texture is great. Egg-based ice cream can be a little too egg-y tasting, and the base is better if prepared the night before - while this ice cream can be made very quickly. I'm impressed - and I'll definitely keep using her recipes.

The Kitchen-Aid works really well. It spins the ice cream quickly, and that's a key for getting as small ice crystals as possible. The big downside is that it's a pretty big bowl to keep in the freezer, but then again, that's the issue with almost all ice cream machines. The upside: if you already have an Kitchen-Aid, you don't need another big bulky machine! And it's pretty big, so you can easily make a fairy big batch of ice cream. I've bought one of my own now, so I can safely return Helena's!

Two years ago we bought the Cuisinart Ice Cream maker. While it is bulky to have another machine, we absolutely love it! Jeni's ice cream book has been a revolution for our family! No eggy ice cream here. Her recipe for backyard mint and buttermint ice creams are heaven.

I had an icecream maker years ago, but the motor burnt out and I have never replaced it (not enough space in the kitchen). I'd love one though!

I have a swedish cook book by lelia
lindhlolm. It has a goog selection of icecream recipeies and no mixing after putting in the freezer. It is called "A piece of Cake". I just bought her new book "Hello Cupcake".
I am not Swedish though love the images and the recipies are very good.

Jenn, thanks for the recommendation! The buttermint sounds awesome, but I'm not so sure if I can find butter essence.

Foodycat - definitely get a new one :)

Anonymous - I've made a few different kinds that don't need an ice cream machine, but I rarely find them to be as good... I haven't tried Leila's though, thanks for the tip!

Anne, I'm so happy you have given thumbs up to the kitchen aid attachment as we were just looking into it! We have had a low end cuisinart machine for years and the paddle has broken ( it still kind of works) We have ice cream base in the freezer waiting to be churned up...dark bittersweet chocolate w/malt! We use a combo of Jeni's method and David Leibowitzs' I'm pretty sure Sicilian Gelato uses cornstarch and no eggs and less cream let's the flavours shine through more. Here's a link to David's
http://www.davidlebovitz.com/2011/09/chocolate-ice-cream-recipe/