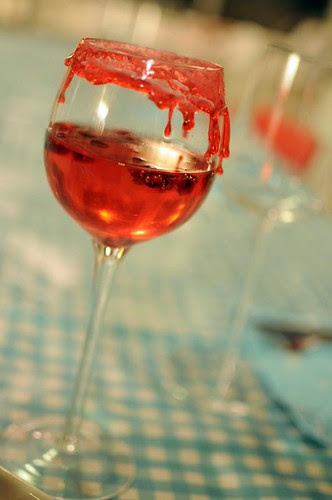 Last night, it was time for one of our favorite yearly traditions: 13 courses for 13-day (as the day after Twelwth night is called in Sweden - it's a national holiday). It was the usual gang - me and Per, Dagmar and Fredrik, Lena and Per, and we were joined by Kika and Mikael as well. As our theme this year, we asked everyone to come up with food connected to a movie or a tv-series. Not so easy! Everyone made a starter, a main course and dessert, and I did a drink and a snack as well, to bring the total up to 13 courses. 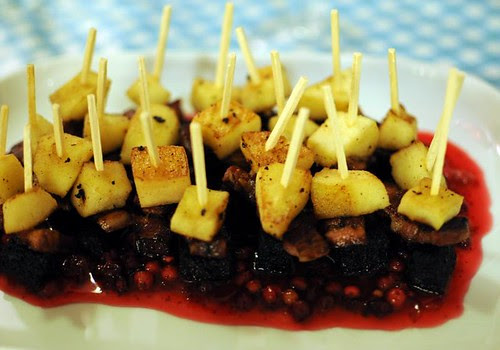 True Blood
I knew right away that I wanted to make something with a True Blood theme for my drink and snack, and I'm so pleased with how it turned out! The glasses are dipped in basically liquid hard candy to create the bloody rim, and the drink is a simple cranberry-lime-soda water, with vodka for some of the company. (Those not driving or pregnant.) The snack was black pudding, bacon, and apple, served on a lake of lingonberries. Surprisingly tasty, I loved it - despite not being much of a black pudding fan. 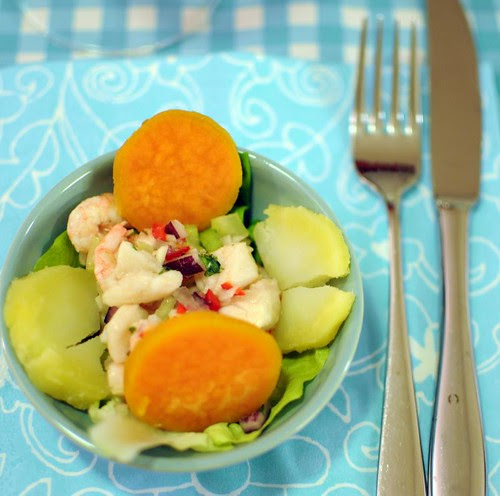 Indiana Jones and the Kingdom of the Crystal Skull
As this movie is mostly set in Peru, Kika and Mikael had chosen a very traditional Peruan Ceviche. Yum! 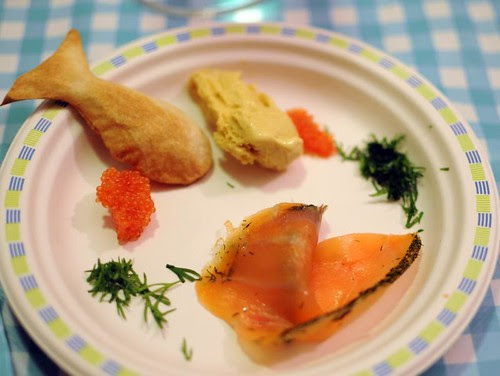 Pingu
I was thinking this would be weird, and even though we weren't served seal or penguin, it sure was strange! We had cured salmon, served with roe, dill and... mustard ice cream. If we had awards, Dagmar would get the one for the strangest dish, for sure. 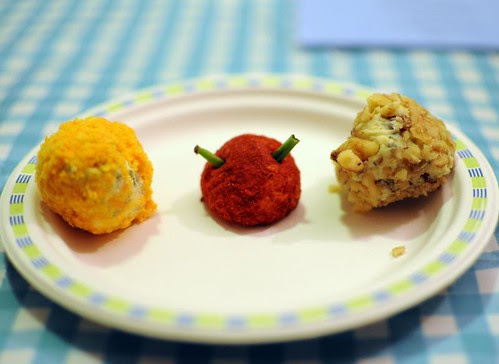 The Good, the Bad and the Ugly
I had no idea what this would be - I was guessing horsemeat and beans - but trust Lena to make something with cheese. It was three types of cheese balls! The good had bacon on the inside and cheeze doodles on the outside. The bad was... spicy! The ugly had blue cheese, and was rolled in walnuts. All three were delicious. 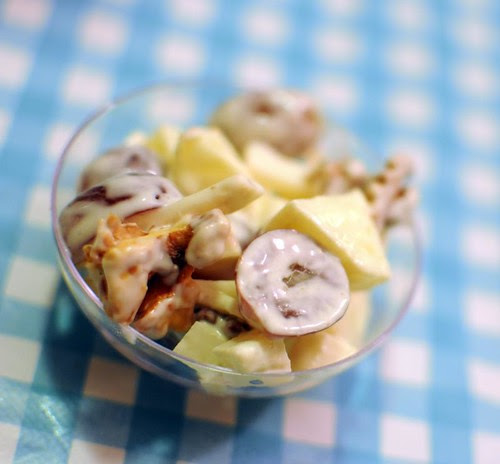 Fawlty Towers
This one was mine - I made a Waldorf salad! 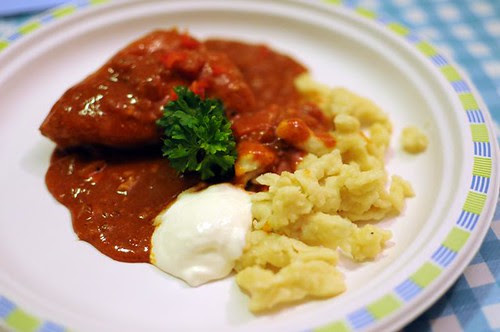 When Harry met Sally
Maybe not what you'd expect, but there's an exchange about "too much pepper on my paprikash" which had made Dagmar and Fredrik curious about paprikash, and that's what they cooked. Very comforting and tasty, perfect winter meal. (And there was not too much pepper.) 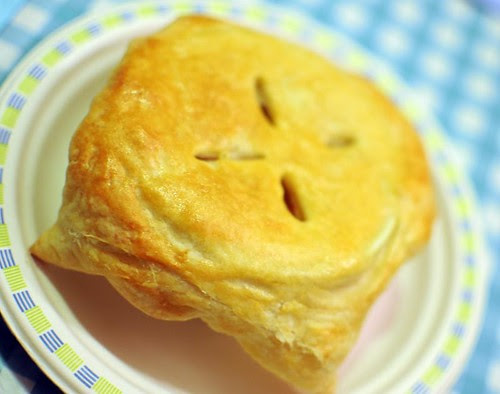 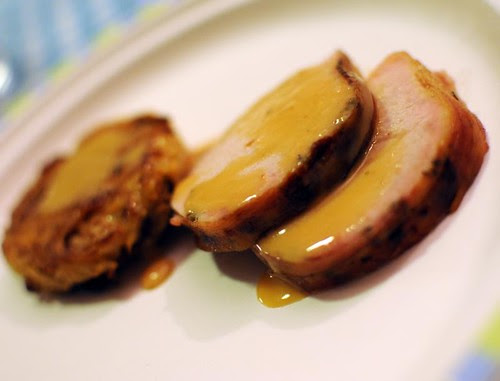 Canadian Bacon
Lena lived in Canada when this movie was big, so her inspiration was obvious. Bacon-wrapped pork tenderloin, with a potato-bacon rösti and maple syrup sauce. Super, super tasty, but at this point, I was getting painfully full. 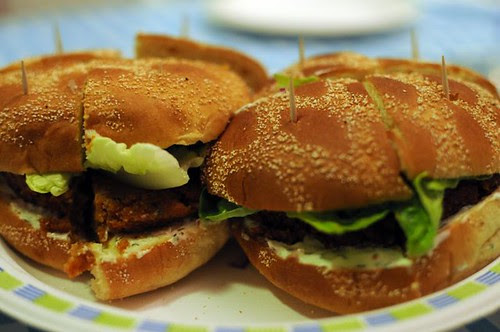 Spongebob Squarepants
Very authentic Krabby Patty burgers! Very tasty too! And Kika had thoughtfully cut them into quarters, so you could eat.. a little. 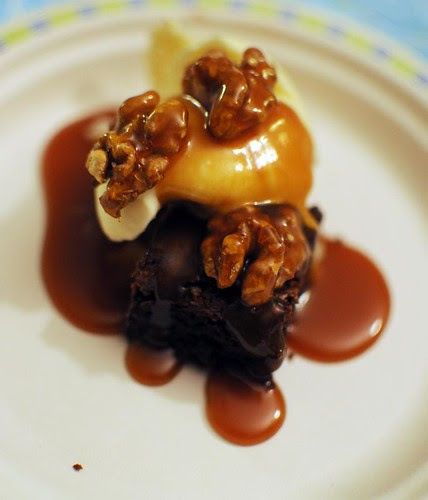 Buffy the Vampire Slayer
Brownies - remember back in season one, Amy? Her mom made her miserable so she used to go over to Willow's house for brownies? Well, that was my inspiration. We served them with caramelized walnuts, vanilla ice cream and creamy caramel sauce. 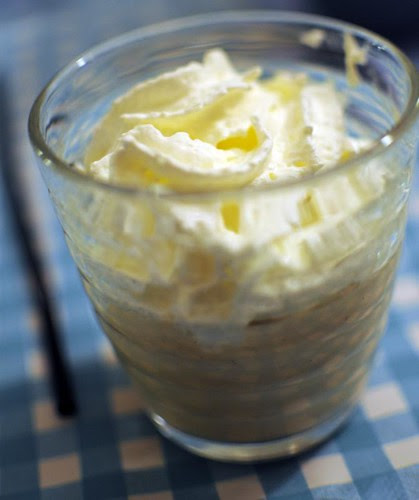 Pulp Fiction
If this had been a main dish, I'm sure it would have been a "royale with cheese", but as it was dessert, Lena made a peanut butter vanilla milkshake, topped with whipped cream. I'm sorry to say I couldn't finish mine, but I was seriously running out of room. 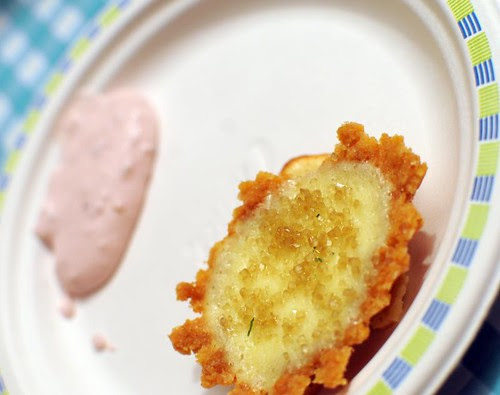 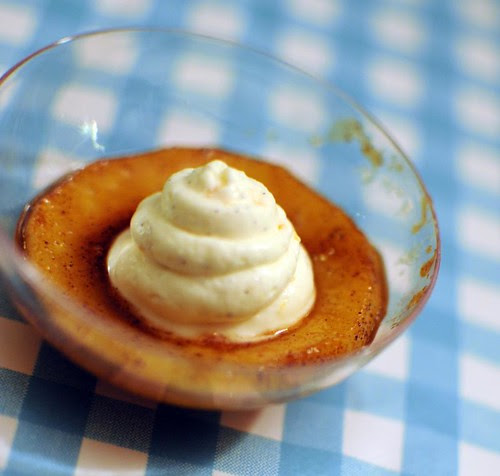 Snow White
Apples, obviously! Fried in brown sugar, and served with an orange mascarpone cream. Despite being last, everyone loved this dish, and some people even had seconds. Hooray for Dagmar!

Thank you for yesterday, I love our thirteen course tradition!!

That is so clever! What a fabulous collection of ideas! I could go for a Good, the Bad & the Ugly platter right now!

Hello and Happy New Year to you and your family. Your 13 course dinner looks mighty impressive. My cousin in Finland said she had 8 for dinner there at her place. She just started writng to me again (email) after a two year stop...Was glad to hear from her and see her on facebook. We are having a lovely December and so far a great January, weather wise. Nice and dry and 50's in temperatures. (F)...I wish you a wonderful year., Kay in Oregon USA

What a fantastic meal, fantastic tradition and amazing looking food!!

Great that you have so good friends, who are ready to participate in this wonderful tradition! :)