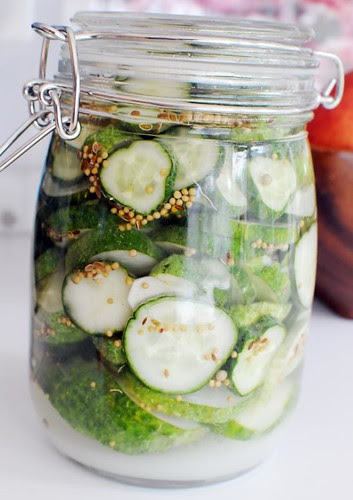 This is particular type of pickled cucumber, called "Smörgåsgurka" in Swedish which literally means "Sandwich cucumber" and obviously refers to how well this cucumber goes on.. sandwiches. If you like pickles on your sandwich? I don't. But I like these, as they are, alongside a plate of Pyttipanna. They're both sweet and sour, and not very salty at all. (I can't STAND "saltgurka", which is Swedish salt-pickled cucumbers. Disgusting!)

This is my first time making it. I happened to get a lot of suitable cucumbers - the small, short variety - from a friend, and this was my first thought. I would have used flowering dill, but I couldn't find any - apparently, there's been a shortage. I used some whole dill seeds instead, which give similar flavor.

Clean the cucumbers, and place them - whole - in a bowl. Dissolve the salt in the water, and cover the cucumbers. Let it sit for 24 hours.

Layer the cucumber slices with sugar, dill seeds, mustard seeds, white pepper and horseradish. Add the vinegar to cover completely. Keep in a tightly lidded jar for 3 weeks before you taste it, and after that, keep in a cool place. (And while it'll keep pretty well, I'd suggest finishing these before too long, I never trust home-preserving all that much.)

Recipe in Swedish:
Smörgåsgurka
Posted by Anne at 19:14

Fantastic picture...they look so mouth watering! Will have to try this soon.