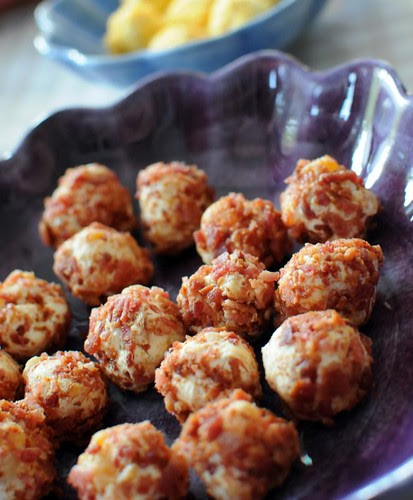 I've seen a few variations on cream cheese balls, and I'm not sure what might be original or not - all I know is I was pretty sceptical. After consulting my Twitter friends, and having been assured that yes, they are indeed tasty, I decided to try it. And I remained sceptical while making them - they're a bit messy, as cream cheese doesn't lend itself well to rolling - but then I served them... and they were a hit. A huge hit. I even liked them myself.

Well, at least the bacon version. The cheez doodle version - it was ok, but not as good as the ones with bacon.

Oh, and it's a pretty good idea to serve these on toothpicks, to to avoid messy hands.

Mix the cheese with apricots, almonds and chili. Chill until the mixture is
firm enough to roll, and then roll into small balls - about the size of a small cherry tomato or a large hazelnut. Chill for at least an hour, or longer.

Fry the bacon until very crispy, and crush. Roll the balls in the bacon, and serve right away. 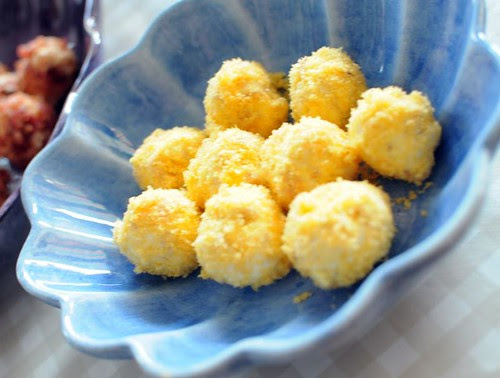 You can use cheez doodles (or something similar - cheetos?) instead of bacon. Just crush it and roll the balls in it. They'll soften pretty fast, so make sure you serve them right away.

Recipe in Swedish:
Ostbollar med baconkross
Posted by Anne at 13:43

this is making me salivate