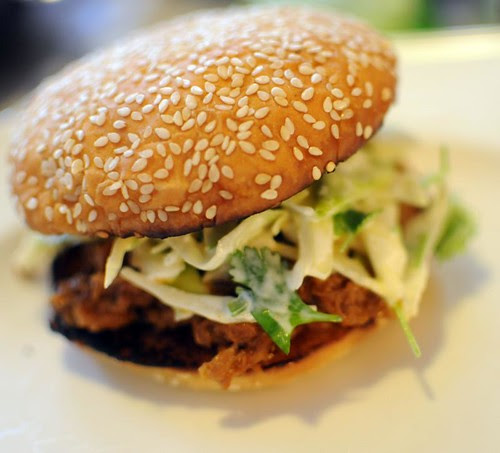 I've made pulled pork before, and I've even made it in the crock-pot, but oh, I had never made this before...

It was so simple. I took some large pieces of pork shoulder, tossed them in the crock-pot and poured on some Coca-Cola. I switched the crock-pot on low, and let it cook for about eight hours. I shredded the meat, and seasoned it with a lot of barbecue sauce.

I buttered and fried some hamburger buns.

I made this Cilantro Jalapeño Coleslaw.

And assembled. It was truly heaven.
Posted by Anne at 09:32

Oh that sounds really good. Cola? Really? Im going to have to try that. How much did you put in?

Oh, I was lazy and didn't measure - perhaps 500 ml? Definitely not enough to cover the meat, but enough that it wouldn't be dry.

The pork industry defends horrendous cruelty to animals -- factory farmers keep breeding pigs locked in two-foot-wide crates where the pigs can’t even turn around for nearly their entire lives. Eight states have passed laws against this type of animal abuse, yet groups like the National Pork Producers Council still support it.

More info at this link: http://www.humanesociety.org/news/press_releases/2010/12/smithfield_pigs_121510.html

John, I assume you're talking from a US perspective. I'm happy to live in a country with much stricter laws on animal welfare - and despite that, there are certainly cruel practises in the industry. People definitely need to make informed choices when they choose to eat meat - and I certainly hope more states pass laws preventing animal cruelty.

Where did you buy your crockpot? I haven't found it anywhere in Sweden... :(

MUST get a crockpot as soon as possible!

Nilo, this is the website of the distributor: http://www.acreto.se/crock-pot

They have both retailers and a webshop! Highly recommended - I love mine!

I bought mine from Järnia

So wonderful and out-of-the-box recipe Anne..:-) I am thinking perhaps we can use beer instead of cola as well,what say?
P.S. Looking forward to more amazing recipes from you..:-)

What cut of meat is a pork shoulder in Sweden?? This looks amazing!! Kate

Kate - I use fläskkarré - it might not correspond directly to shoulder though, more neck/back, because of the different ways to butcher. Anyway, it's perfect for this dish :)

OMG...absolutely FANTASTIC!!!!!!! I popped this in the slow cooker last night and woke up to the most unbelievably moist, amazing meat. I've shredded it, smothered it in bbq sauce and can't wait for lunch...Thank you SO much for this recipe...it's a keeper for sure!!!! Kate