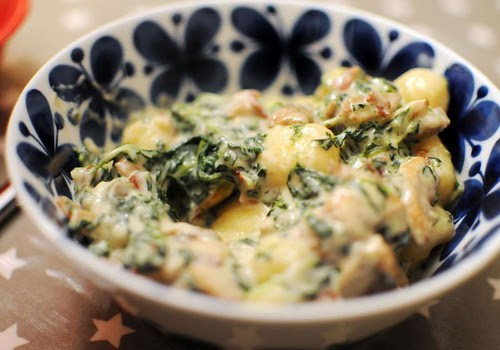 Gnocchi is delicious. Little fluffy pillows, made from potatoes and flour - what's not to love? I've promised to make gnocchi myself, many times. However, I just can't seem to get around to it. I've tried, once, and failed miserably. (Thanks Jamie Oliver, for saying "use as little flour as possible" - NO, don't. Because they will turn to mush after cooking. You need a fair amount of flour, actually.)

So, I usually just stick to store-bought gnocchi. It usually contains additives that I don't really like, but once in a while, I can't resist. Besides, they're a quick dinner solution, and making them from scratch would pretty much take away from that.

This recipe might seem a bit fussy, and it does dirty several pans. Sorry about that. But I hope you'll like it anyway.

Dice the bacon, and fry until crispy, in a dry pan. Slice the mushrooms, and fry them in the same pan, until they've lost all of their liquid and start to color. Add the spinach. Pour in the cream, and cook on low heat for a few minutes. Season with salt and pepper if you'd like.

Boil the gnocchi in plenty of salted water. Meanwhile, heat a large grying pan and melt some butter. The gnocchi is cooked through when it starts to float - so fish out all the floating gnocchi with a skimmer, and move them to the frying pan. Fry all the gnocchi until lightly golden. Serve with the sauce.

Can confirm: is delicious. I also added a teaspoon of pesto to the sauce.