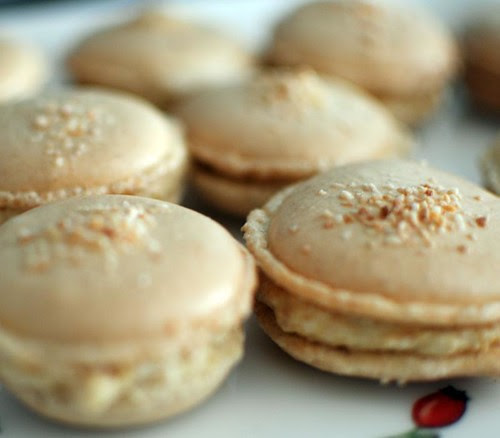 Ah, macarons again! I actually made these quite a while ago, but I haven't gotten around to posting about them since the recipes are so long. Regardless of that, macarons are fun to make and easy to love. If you haven't yet, do give them a try!

I've made similar macarons before, but this time I'm folding the almond praline into a buttercream rather than into a chocolate ganache. They're simple, clean-tasting and rather crunchy. And delicious, but I don't need to tell you that.

Due to very popular demand, I might invite some people into my kitchen for very tentative "classes" on macarons. We'll see how that turns out...

Combine powdered sugar and almonds in your food processor, and grind until very fine. Sieve. Re-grind any lumps or big pieces of almonds. Mix carefully (they tend to separate a little bit when sieving, since the sugar falls through first.)

Beat egg whites and sugar until you have a thick, glossy meringue. Don't overbeat. Stir in the almond-sugar powder, and fold together. Don't overmix this - most seem to say that you should use less than 50 strokes. (You can try it by dolloping a little batter on a baking sheet - if the peak falls down, it's ready. If it doesn't, try a few more strokes.)

Pipe small rounds on a baking sheet with baking paper. If you'd like, sprinkle some extra ground almonds on half of them. Leave at room temperature for 30-60 minutes, to form a skin.

Bake at 150°C for 10 minutes or so. (I have a convection oven, and in my earlier attempts, I baked them for 15 but am now down to about 10.) Let them cool completely before filling. Unused shells can be frozen, or kept in an air-tight container for a day or so.

Lightly toast the almonds, either in the oven or in a dry frying pan. Chop coarsely.

Place the sugar in a heavy saucepan, and heat (on medium heat) until it's starting to melt. Don't stir it! Shake the pan lightly to help the sugar melt evenly, and when it's all turning golden brown, quickly add the almond and stir. Pour onto a silpat or teflon mat, and try to make it as thin as possible. (It's very very hot, so do this by covering with a second silpat or teflon mat, and press with an oven mitt.)

When the caramel has cooled, coarsely chop it and place in a food processor. Run into a very fine powder. This is your finished praliné - keep it in a tight-lidded jar.

Beat the egg yolks until fluffy. Bring sugar and corn syrup to a boil, and immediately remove from heat. Pour over the egg yolks and beat at high speed until fully cooled. (Try not to get any on your beaters, or it will spin to the sides of your bowl.

Add the butter, a pat at a time, until fully incorporated. Divide into half, and mix one half with the almond praline. (The other half keeps well in the fridge or freezer, but might need to be re-beaten before using.)

Spread - or pipe - the cream onto half of the macaron shells, top with the remaining shells. Eat right away or freeze.

Recipe in Swedish:
Macarons med mandelsmörkräm
Posted by Anne at 11:13

Email ThisBlogThis!Share to TwitterShare to FacebookShare to Pinterest
Labels: macarons

They look great! And totally delicious with that buttercrem! Wow!

I'll attend class as well. Would be great to practise my not-really-existing Swedish maybe. ;-)

Actually, I was in Nacka last week, but very busy...

Yummy, i am totally addicted to Maccaroons. These look amazing and im dying to try the recipe.