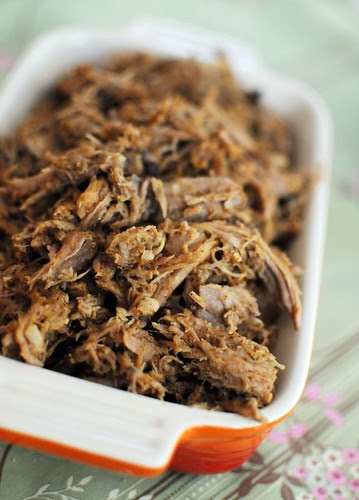 I finally tried the crock-pot for the first time today! And what better to try than... carnitas! Or at least, slow-cooked pork. I call it carnitas because that's how we ate it - we fried it in a skillet after the liquid was absorbed, and ate it with tortillas, red onions, and cilantro. (And I admit, a dollop of créme fraîche on mine.) I didn't season the pork a whole lot in the pot, thinking I'd season it more at the final stage instead, and that's what I ended up doing. I have most of it stashed in the freezer, and will definitely use up some for tacos, and some for pulled pork sandwiches with lots of barbecue sauce.

Because, let me tell you, this was so good. So, so good. Amazing really. My regular carnitas are good, too, but this was so much more tender. It truly fell apart at the touch of a spoon. I could hardly believe it. In fact, for the first hour or so, I was really sceptical. Nothing at all happened, so I put my slow cooker on high for half an hour or so, until I could at least feel it getting a little warm, and then back to low for about eight hours.

Titus adored this, too.

So, a recipe? Hardly need it. Here's what I did. I took a big piece of pork - about two kilos of shoulder - and seasoned it with salt, cumin and ancho chili. Placed it in the slowcooked, and added the juice of one lime and one orange. I also added about 100 ml of water, which in retrospect probably wasn't necessary at all.

And that was that. I can't believe it's this easy to cook this good. It took five minutes of prepping time, and then five more minutes before serving. Anyone, anyone can do this.
Posted by Anne at 21:52

So you lost your Crock-Pot virginity at last? :D

Totally. Planning on using it for a whole chicken in a few days, too.

Pot chicken is lovely!
I've made it three times now and really makes the difference!
Put two large carrots underneath the bird and add 125 ml water/stock. Salt and pepper with lemon (Kockens you know without MSG) is all you need :D

We were thinking of making a ratatouille at the same time, so possibly adding a bit of cut up veggies and tomato in the bottom, then the chicken on top :)

That sounds delicious! Good luck and keep me posted on this one :)

Just got my Crockpot last week and am anxious to try it.

@Anne; did you leave the pork in one piece?

@Receptomaten; how long did you cook the chicken?

Annica - yes, one piece! It wasn't very spicy, but I added spice towards the end instead. (When it was already shredded.)

When you get ready to do barbecue--put your pork back in the crock pot, add your sauce, and let it cook on low/med for three hours or so. This will make a lovely flavor, very deep.

You can do a roast and veg in your crock, or the chicken comes out very well (do keep in mind it won't be dark and crispy on the outside like it is when done in the oven).

I do our turkey for Thanksgiving, here in the US, this way to free up the oven for other dishes.

Stew is wonderful and thick when made in the crock also. I start mine early in the morning. Just cut your meat into small cubes, throw it in a bag and flour lightly, then give it a browning in a skillet. Add liquid (I also save the juice from previous roasts for this), and your veggies. Let it cook on med/high all day and dinner is ready when you come home! We love homemade bread with this too.