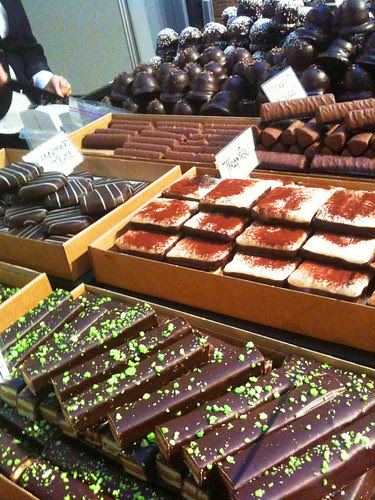 This weekend, it was the annual Chocolate Festival in Stockholm, at Nordiska Museet. It's really a fun event, but the crowds are huge. I went on Friday when it was a little less crowded, and when the contest "Pastry Chef of the Year" (Årets Konditor) took place. 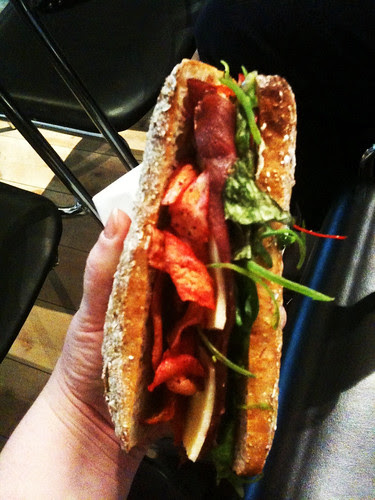 I was lucky enough to be invited to the press lunch where we got extremely yummy sandwiches - in fact, the very sandwich that was pronounced "sandwich of the year" earlier in 2010 (the baking association in Sweden is pretty active with contests). It had arugula, bresaola, Västerbotten-cheese (which is somewhat similar to parmesan) and fingerling potato crisps. 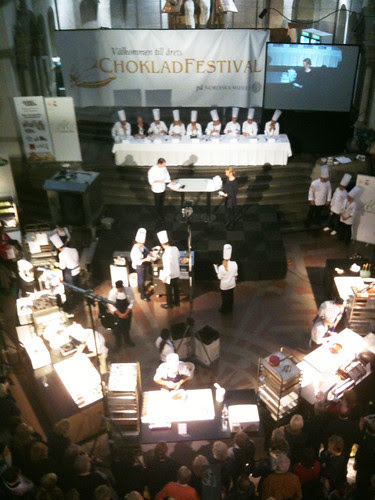 And the very best part of the lunch was the cake-testing. In the actual contest, the pastry chefs were asked to make a cake (well, three), an individual pastry, and a chocolate biskvi which is somewhat Sweden's answer to the macaron. (See my recipe here.) They had made an extra cake for the press to taste, and we were each given a small slice of each of the five cakes. 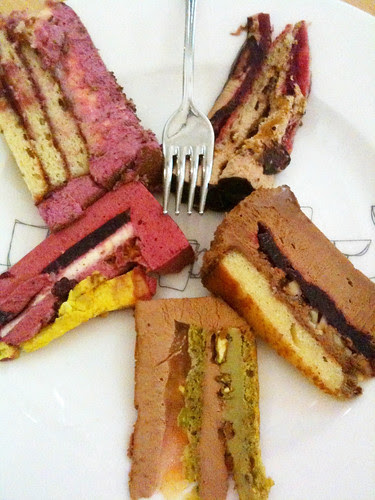 The winning one is the one at 6 o'clock in the photo above. It was amazing - with pistachio dacquise layers, chocolate mousse and a peach gelée, it was very flavorful and had contrasting textures. It was inspired by "Aladdin" (each pastry chef had to choose a children's story as their inspiration) and the actual cake was decorated with a flying carpet. Definitely my favorite. The second best, in my opinion, is the one just to the right of it, and mostly because it had a wonderfully moist almond cake layer, topped with crunchy caramelized nuts and chocolate mousse. It was also the simplest one to reproduce, so I just might try it someday. 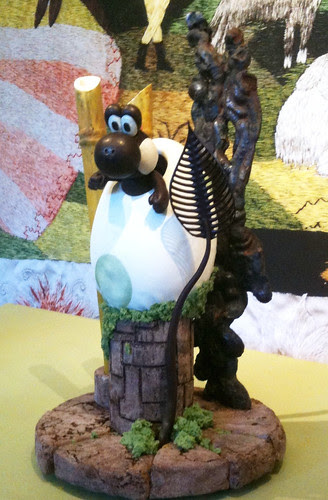 This was in a separate contest for chocolate sculptures, and since this featured Nintendo character Yoshi I felt compelled to take a photo. Cute!
Posted by Anne at 11:30

oh my gosh!!!! My fiance and I saw this on TV the other day... if I would have known about this prior.. i would have made the trip down. WE ARE CHOCOHOLICS! haha. :) I'm so jealous you went. And EVERYTHING looks delish. Especially those cake slices! Thanks for sharing!!

While looking to prepare some sweet recipe I recently found this online provider of maple Syrup and I've had a very good experience with them..so for all of you maple syrup lovers... this is THE ideal place to order online.

what a delicious time!

Oh wow, that first pic. There's just something classic about chocolate brown with a little bit of green! John.