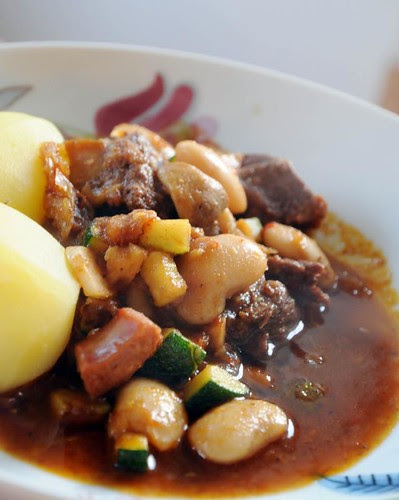 The weather report says it'll rain all week. To me, rainy weather really calls out for comforting food eaten out of bowls rather than on plates. This stew is a nice variation from my more commonly cooked ones - it has bold, intense flavors from the beer, garlic and chorizo sausage, but also gentle crunch from just-cooked zucchini and silky mushrooms. It'll take a while to cook, so prepare accordingly. And if you can't find all the ingredients - I imagine ajvar relish can be hard in some places - just leave it out.

Preheat the oven to 150°C. Start by placing the beef, water, beer, ajvar relish, veal stock and some salt and pepper in a heavy pot or dutch oven. Bring to a boil, cover with a lid and put it in the oven.

After an hour, fry the celeriac in some olive oil until golden, and add this to the pot.

After another hour, fry the mushrooms, garlic and chorizo in some olive oil, and add this to the pot as well.

After a total of 2 and a half hours, remove the pot from the oven. Fry the zucchini in some olive oil, and add to the pot along with the white beans right before serving.

Season, and serve with rice, bulgur or boiled potatoes.

I find that you can get ajvar relish at almost any semi-good foodstore these days.