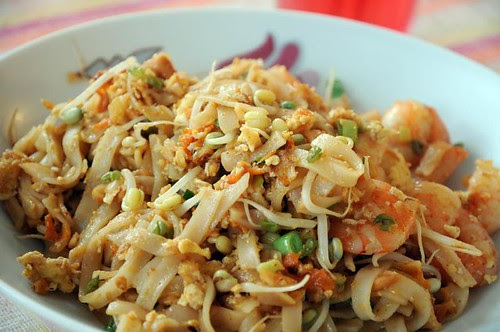 My dinner the other day came about because I had leftover peanut sauce. I had originally made it as an optional extra with this gorgeous shrimp pad thai, and I had enough to make another meal. (Well, I added the leftover half can of coconut milk and a few spoons of extra peanut butter to it.) So today, let me tell you about this pad thai. I got the recipe from one of my readers, Annika. She has travelled extensively in south-east Asia, and when I asked her for a great pad thai recipe she graciously shared this one. It's rather unorthodox and uses ketchup rather than tamarind paste - but really, it's very tasty and definitely better than my local take-out version.

I've made some small adaptions, like skipping tofu (which I really don't care for). You can swap out the shrimp for any other protein - chicken would be awesome.

It's a really quick dish - including prep, it'll come together in less than half an hour. A lot less, if you're efficient.

Start by soaking the rice noodles in hot water. I usually place them in a bowl, add boiling water and let them soak until soft. It'll take anywhere from 3-10 minutes, depending on your noodles - so check them. When soft, drain the noodles.

Heat the oil in a large frying pan or wok, and fry the shrimp, carrots and garlic until the shrimp are pink and opaque. Move everything to one side, crack in the eggs and stir-fry until they're done. Add the noodles, and give everything a good stir.

Add the sauce and the peanuts, and stir again. Remove the pan from heat, and add in the spring onions and the bean sprouts. Serve straight away, with the optional sauce if you'd like.

For the peanut sauce, just mix all the ingredients in a small saucepan, and bring to a boil. That's it!

had the most wonderful pad thai last night for about 3 euros... never in london have i had such good pad thai and believe me, i have searched hi and low. never tried making my own, but will soon.

This looks wonderful, never made anything like it before. Lovely picture too.

the peanut sauce was awesome! Big hit here (didn't actually do the pad thai since egg is a no go here :D)

I absolutely love this receipe. It's the best pad thai i've ever had. can't eat pad thai at the restaurant anymore :) thanks for posting this....it has been a constant addition to my and my girlfriends evening meals!

Thanks for sharing this recipe!! :)