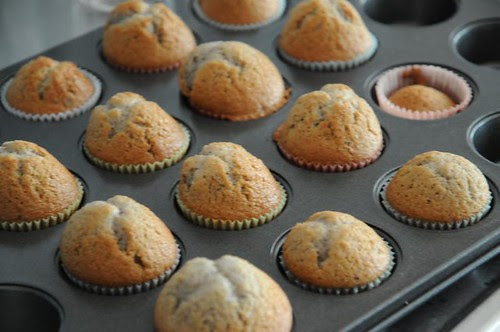 When I was an exchange student in California, way back in the 90's, I was introduced to the marvellous world of ready-to-bake cookie dough. I was thus excited to get a big box with chilled cookie dough, brownie batter, and muffin batters in the mail, from Swedish company American Cookies. They have long been selling their baked goods in their own little cookie stand in one of the larger malls, and have apparently been delivering to chain stores like 7-11. And now they're read for mass-market.

I've tried everything I got - and my verdict? Well. Pretty good! Ingredients-wise, some of the things do contain a lot of additives and things like "blueberry aroma". But, I was rather impressed by especially the brownies, which were really tasty and didn't contain anything strange. The blueberry muffins you see above were rather average, and I would have liked more actual blueberries. The chocolate pound cake was ok, but didn't have a lot of chocolate flavor. (It was, however, pretty delicious with vanilla ice cream and strawberries.) The chocolate chip cookies? My husband was enthusiastic, calling them some of the best cookies I've ever made! Gee, thanks honey! Still, they're not half bad. And I wouldn't mind having some of these at hand in the fridge, for sudden sweet urges. I hope I'll see them in my grocery store soon.
Posted by Anne at 20:03

There are few memories so sweet as a chick flick and 1/2 a tube of cookie dough with your friend. YUMMY!!! I don't think I could dig in like that anymore, but it was fun while it lasted.